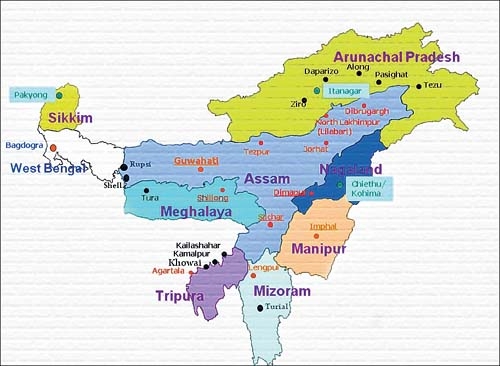 New Delhi, Jun 13
Almost 80 per cent of the districts that reported their first COVID-19 case in the last three weeks were in north-eastern and eastern States, the Cabinet secretary’s presentation to State Governments on Thursday said.
Calling it a “significant spread”, the presentation said that of the 98 districts that reported their first infection in the past three weeks, more than half (53) were from north-eastern States — seven of them, barring Assam. One-fourth of these districts (25) were in four eastern States: Chhattisgarh (9), Odisha (7), Jharkhand (5) and West Bengal (4).
For these States and districts with low case load and emerging hotspots, “testing and tracing is crucial for containment”, the presentation said.
The fourth phase of the lockdown that began on May 18 allowed significant inter-State movement and gave States the power to delineate containment zones. While eastern States had begun to see growth in cases before that date, Tripura was the only one of these seven north-eastern States to have more than 15 cases at that time. Their total cases have increased from 189 on May 18 to 1,628 cases on June 12.
Officials from north-eastern States told The Indian Express that almost all their active cases are recent returnees — most of them from Delhi, Chennai and Mumbai. “We believe there has been extensive community transmission from the cities they came back from — Delhi, Maharashtra, Haryana, Uttar Pradesh, Tamil Nadu, West Bengal,” said Meghalaya Health Secretary P Sampath Kumar, adding that the State was using pool testing for all returnees.
These States, many of which had initially paid their residents to not come back at the beginning of the outbreak, are considering locking down their borders again. Sikkim had shut all its borders in February-end, and did not have any case until late May. As the lockdown eased, the State cautiously opened its borders for 6,000 people to come home. Expecting 200 more from Pune, a senior official told The Indian Express that the State plans to seal its borders again.
Manipur had two cases from abroad at the beginning of the outbreak. As of June 11, it has 342 cases with 31 testing positive on that day, said Dr Shasheekumar, the State’s COVID-19 nodal officer. While Manipur has better medical facilities than many other north-eastern States, it still may not be equipped for a deluge of cases, with only 80 COVID beds and 28 ventilators at its two medical institutes — JNIMS and RIMS.
Arunachal recorded one case from Delhi just before the lockdown. “But because of the movement of people, we now have 21 active cases — two from Chennai, the rest from Delhi. We test them three days after their return. We believe many are possibly getting infected on Shramik trains.
Around 3-4 per cent of those returning are testing positive,” said Arunachal Pradesh Health Secretary P Parthiban on June 11. Over the past two weeks, 8,000 people have returned to Arunachal, and another 4,000 are expected over the coming weeks.
Nagaland had one case before the easing of the lockdown. It had paid non-resident Nagas Rs 10,000 as a one-time grant to not return to the state. This, said Health Secretary Kesonyu Yhome, gave the state government some time to put its infrastructure in place. Nearly 10,000 people have returned to Nagaland and another 5,000 are expected in the next fortnight. “To some extent the ILP also helped restrict movement. And we only allowed people to enter through Dimapur, sealing off all other entry points,” he added.
The ILP also helped Mizoram, said its Chief Secretary Lalnunmaiwa Chuaungo. Like Nagaland and Arunachal, Mizoram recorded one case before the lockdown — a student returning from the Netherlands. But since then it recorded 101 cases among the 12,000 who returned to the state as of June 11. Mizoram expects its last contingent of 2,000 residents to return over the next week. “We have tested all 12,000 people who returned. If the case load were to increase, a small state like ours may not be able to handle it,” Chuaungo said.
The Indian Express