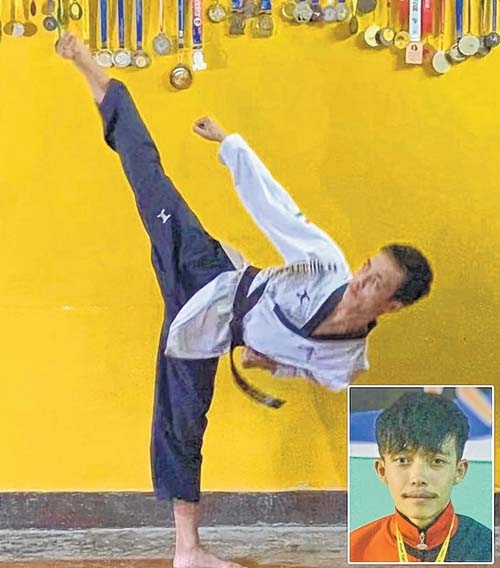 By Our Sports Reporter
IMPHAL, Jun 13 : Nongdaren Khaba finished third to bag a senior division bronze medal at the 1st Poomsae Lover Club Invitational Online Championship which was held on June 3 last.
Nongdaren Khaba who trained at Union Taekwondo Academy (UTA), entered the senior division this year and had represented India and brought laurels on multiple occasions earlier.
He won his medal last in the form of a bronze at the All India Inter University Taekwondo Championship held in Punjab from March 12 to 14 before the COVID-19 outbreak put sporting activities across the globe to a complete halt.
Nongdaren who represented India in the Junior World Championship 2018 at Taipei had won a silver medal at the 2nd Asian Championship 2019 held at Jordan.
The poomsae gold medallist at Jeonju Open, Korea 2017 had also won kyurogi gold medal at the 2nd Kukkiwon 2018; silver medals in kyurogi events at Malaysia Open 2018 and 2nd Asian Open, Vietnam 2019; bronze medals in kyurogi events at Jeonju Open, Korea 2017, Chuncheon Korea Open 2017 and poomsae event at Malaysia Open 2018.
The promising taekwondo player is son of Potshangbam Ranjit and Tayenjam Sarda of Khagempalli and has been training relentlessly under the supervision and technical advice of coach Haripriya at UTA.
The young player also prayed that normalcy may return soon and he could practise with his inmates as done earlier.