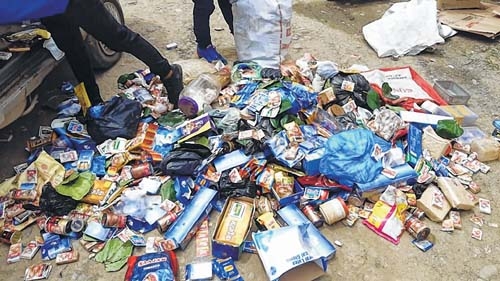 By Our Staff Reporter
Imphal, Jun 29: The All Manipur Students' Union (AMSU) Imphal East district committee seized a huge number of tobacco products worth around Rs 1.5 lakh from shops operating in Mantripukhri, Imphal East, today.
The seized items which include Talab, Saajan, Shikhar, pan leaves, betel nuts, cigarettes etc were disposed of by burning at Mantripukhri, later.
Speaking to media persons, AMSU Imphal East unit president Sanjoy Mangsatabam said that selling tobacco items in markets by colluding with wealthy businessmen, especially during the lockdown is condemnable.
Similar drive will be carried out in other parts of the State too, he said and sought cooperation from the public, CSOs and other stakeholders.