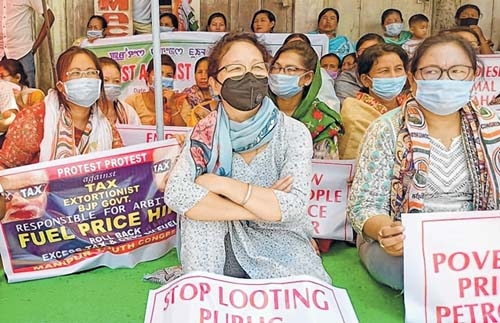 By Our Staff Reporter
IMPHAL, Jun 29: Congress party today staged a protest demonstration at Mayang Imphal against hiking prices of fuel very frequently by the NDA Government.
A number of farmers also took part in the protest demonstration jointly organised by Manipur Pradesh Youth Congress Committee (MPYCC), Manipur Pradesh Mahila Congress Committee (MPMCC) and Mayang Imphal Block Congress Committee.
Speaking to media persons by the sideline of the protest demonstration, MPMCC president Mutum Sarma decried that the Narendra Modi Government has been looting the people by sharply hiking the prices of fuel recently.
Questioning if the fuel price hike could not wait till the COVID-19 pandemic is contained, Mutum Sarma remarked that the price of diesel has soared higher than the price of petrol for the first time in the history of India.
Demanding immediate rollback of the fuel price hike, she warned that the protest demonstration would be further intensified in accordance with AICC’s advice  if the fuel prices are not lowered.
MPYCC president Mahananda Nunglepam said that prices of petrol and diesel are being repeatedly hiked in the country while the price of crude oil in international market has come down considerably.
Pointing out that fuel prices soared because of raising the Central and State taxes levied on fuel, Mahananda urged Modi Government to reduce the Central and State taxes levied on fuel at the earliest.
The protesters put up placards which read as “Stop looting public during pandemic”, “Cut taxes on fuel”, “Withdraw the anti-people fuel price hike order” etc.
A protest rally was also taken out at Kakching against the sharp fuel price hike at Kakching under the aegis of MPYCC, MPMCC and NSUI, Manipur.
The rally was flagged off from Kakching Khongnang Mari Phangba at around 2 pm.
As the protesters headed towards M/S Kh Beikul Oil Pump, they were blocked by police.
MPYCC former president Amir Hussain said that the protest rally was part of the  ‘Speak  Up India’ campaign launched by AICC president Sonia Gandhi against frequent hiking of fuel prices amid the extreme misery caused by the COVID-19 pandemic.
He urged the State Government to cut the State tax levied on fuel and ensure that petrol and diesel are sold at ‘normal rates’ in the State.