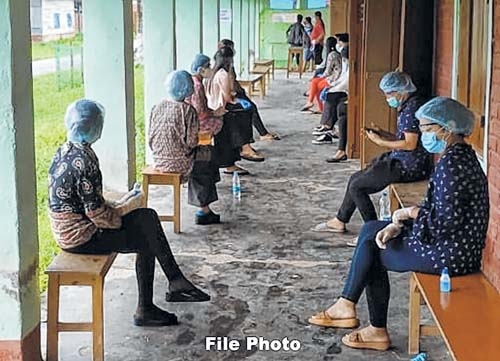 By Our Staff Reporter
IMPHAL, Jun 29: Of the 25 samples collected from different parts of Ukhrul district which were said to be positive after they were declared negative, 24 were re-tested today and 19 were found negative while five turned out to be positive for COVID-19.
According to information received from Ukhrul district administration, 25 people were sent home from quarantine centres after their samples were declared negative but 24 hours later, their samples were said to be positive which created deep confusion and apprehension among Ukhrul denizens.
Swab samples of 24 of them were collected and tested at RIMS today. While 19 samples were found negative, the other five turned out to be COVID-19 positive.
The remaining one individual is currently staying at Ukhrul district hospital and the individual’s sample would be sent to the laboratory for COVID-19 test tomorrow.
After the 25 individuals were said to be COVID-19 positive, Ukhrul district administration declared Chingai and Lambui villages as containment zones.
On the other hand, samples of 60 family members and close contacts of the individual who worked as a caterer at a quarantine centre of Thoubal district and tested positive for COVID-19 have been tested. All of them were found negative.
Nonetheless, Health officials have been investigating how and where the man contracted COVID-19.
According to a press release issued by Additional Director (Health) and COVID-19 Common Control Room spokesman Dr Khoirom Sasheekumar Mangang, 35 new positive cases of COVID-19 were detected at JNIMS taking the total rally to 1227.
33 of the people who have been tested positive belong to Kangpokpi district while the other two are residents of Senapati district.
In the meantime, 39 persons recovered from the contagion during the last 24 hours and they have been discharged from hospitals.
32 of the 39 recovered people were discharged from COVID Care Centre, Meitram and the other seven from Tamenglong district hospital.
Twelve of them belong to Pherzawl, 11 to Senapati, seven to Tamenglong, three to Churachandpur, two to Kakching, and one each to Bishnupur, Kangpokpi, Noney and Ukhrul.
The recovery till date is 40.26 per cent while the total number of active cases stand at 733. Altogether 494 people have recovered from COVID-19 in the State so far.
Meanwhile, the State Government has given its consent to let five passenger flights land at Imphal airport in a day with effect from today.
527 people came to the State by air today and they have been sent for quarantine, informed a source.