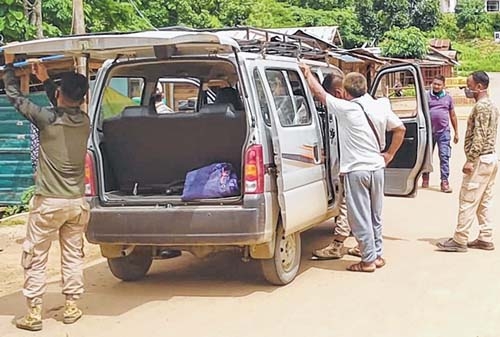 Our Correspondent
MOREH, Jun 29: Checking and frisking for drugs and arms have intensified on the Imphal-Moreh road, causing inconvenience to all those travelling along this stretch of road.
The Manipur Police and Assam Rifles have intensified checking to curb smuggling of drugs and arms into the State wioth seizuire along this route becoming an almost daily affair.
The police and Assam Rifles have also been able to seize many contraband items in the past few months.
However, the tightened security measures at the check-post have affected the ordinary citizens, including mediapersons and hampering their work and programme schedules due to the numerous stoppages along the highway.
Travellers expressed displeasure over the extreme security and frisking measures adopted, and said that at this rate, people would be discouraged to even travel along the Imphal-Moreh road.