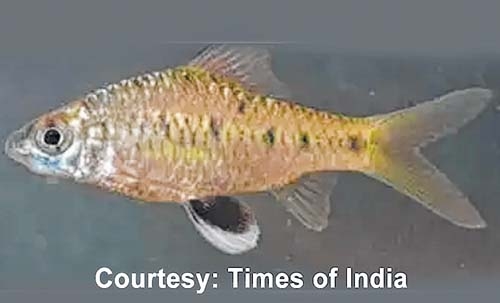 MANGALURU, Jun 30
A team of scientists from the Bombay Natural History Society, Kerala University of Fisheries and Ocean Studies, Modern College, Pune, and the Indian Institute of Science Education and Research – Pune, has described a new genus and species of freshwater fish from the Western Ghats.
This new species has been named as Waikhomia Hira. Waikhomia is in honour of Professor Vishwanath Waikhom of Manipur University and hira means diamond and refers to the small symmetrical, rhomboidal spots on the side of the body.
“Professor Waikhom is one of India’s greatest living fish taxonomists who has described over 100 species of freshwater fish, and worked tirelessly to promote the science of taxonomy and systematics in the country”, said Dr Rajeev Raghavan, Assistant Professor at the Kerala University of Fisheries and Ocean Studies, and a senior author on the paper.
The Maharaja Barb, Puntius sahyadriensis, a member of the freshwater fish family Cyprinidae was described in 1953 from the Yenna River at Mahabaleshwar, and subsequently recorded from several east and west flowing rivers in Maharashtra and Karnataka. An integrative taxonomic study suggested that the species is distinct from Puntius, within which it is currently included, as well as from all other members of the family Cyprinidae. The authors have proposed a new genus name- Waikhomia to accommodate this unique species.
“Currently, the distribution of the new species is restricted to the upstream catchment of the Kali River system near Chandewadi, Kamra, and only future surveys in and around this region, as well as in adjoining river systems will give us a clear idea of the larger distribution range of this species,” said Unmesh Katwate, Scientist at the Bombay Natural History Society and the lead author of the study.
The rivers in the central and northern parts of Western Ghats, particularly in northern Karnataka and Maharashtra are poorly explored for their fish diversity. “Some of the rivers in the northern part of the Western Ghats possesses high levels of ichthyofaunal diversity, but intensive exploratory surveys, taxonomic revisions, and molecular methods are urgently required to uncover this hidden diversity” said Dr. Neelesh Dahanukar, Scientist at IISER, Pune and senior author of the paper.
The paper discussing these results was published in the leading international journal, Zootaxa on Monday.
Courtesy ToI