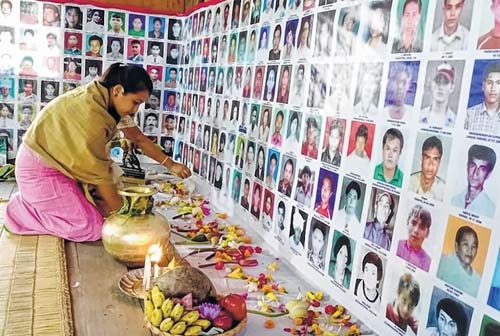 By Our Staff Reporter
IMPHAL, Jul 11: Extrajudicial Execution Victims' Families Association, Manipur (EEVFAM) has appealed the Centre and State Government to establish CBI Special Courts in Manipur for speedy trial of alleged extrajudicial execution cases.
Speaking on its 11th foundation day, EEVFAM president Renu Takhellambam said that the Central Bureau of Investigation (CBI), on direction of Supreme Court, has filed 39 FIRs (First Information Reports) and submitted 14 chargesheets. Till now, 80 Manipur police personnel have been chargesheeted. However, no personnel of the armed forces are chargesheeted so far despite "evidences" of their involvement in the cases, she said.
Informing about the status of the cases, Renu said the CBI has filed closure reports in 8 cases while petitions have been filed challenging 6.
Following protest petitions, orders have been passed for further investigation in 2 cases while 4 petitions are still pending in CJM and JMIC, she said.
Stating that their struggle for justice in the alleged extrajudicial executions in Manipur has seen some success and setbacks this year, Renu said that the subordinate Courts in Manipur last heard a case on March 7, 2020 while the Supreme last heard on September 28, 2018.
Emphasising that Special CBI Courts should be established in Manipur for speedy trial of the alleged extrajudicial execution cases, Renu said that the State Government should promptly grant prosecution sanction of all police personnel named by the CBI without delay.
All police personnel named in the CBI  chargesheets should be suspended so that trial of the cases can be conducted in a conducive atmosphere and justice can be delivered without any threat and intimidation, she said the State Government should allocate adequate budgetary funds to fairly compensate the victims under 357A of CrPC.
Stating that the CBI has not yet submitted chargesheets in 17 cases and investigations into 2 cases have not been concluded, Renu said the agency should complete all pending investigations and file chargesheets at the earliest. As per the direction of the Supreme Court, the CBI should have completed investigation of all the 39 cases by December 2018, she added.
Drawing the attention of the Centre, Renu said that the Ministry of Home Affairs and the Ministry of Defence should grant prosecution sanction of all personnel of the armed forces of the Union indicted by the CBI on criminal charges. All armed forces personnel indicted by the CBI should be suspended to ensure fair trial without threat and intimidation, she said asking for adequate budgetary funds to compensate the victims.
She further appealed to the Supreme Court to list the case hearing at the earliest to ensure investigation of the rest of the 1528 cases (minus the 39 cases under investigation). The High Court and subordinate Courts of Manipur should also take up the trial of the alleged extrajudicial executions cases on top priority without any further delay. Witnesses should also cooperate with the investigation to ensure justice for victims, Renu said.
Floral tributes were paid to the photos of the victims of alleged extrajudicial encounters by members of EEVFAM, HRA and kin.
A panel discussion on the theme "Justice delayed is justice denied" was held with Imphal Times Editor Rinku Khumukcham as moderator.
EEVFAM secretary Edina Yaikhom, Pemla Shaiza and others attended the foundation day observance.
Powered By Sangraha 9.0