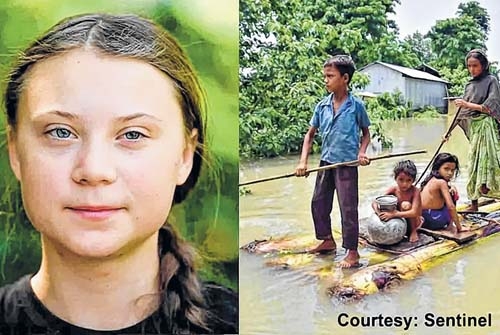 GUWAHATI, Jul 29
Greta Thunberg, the teen climate activist who rose to prominence with an impassioned plea to world leaders at the UN's Climate Action Summit, has now come to the rescue of the flood-ravaged countries of India and Bangladesh.
Greta on Tuesday took to her twitter handle to announce that she would donate funds worth €100,000 (87.74 lakh Indian rupees) to multiple organizations that are currently conducting relief efforts in the flood-hit regions of North East India and Bangladesh.
"Right now millions are suffering from extreme flooding fuelled by the climate crisis in India and Bangladesh-already hit by the devastation of cyclone Amphan and COVID-19", the 17-year-old wrote in a tweet.
"My foundation will donate €100,000 prize money to BRAC, Goonj, Action Aid India, and Bangladesh. I'm supporting these NGOs—working tirelessly and in desperate need of funds—to make sure help reaches communities affected as soon as possible", she added.
Greta urged people to consider making donations to the relief effort and visit the websites of these organizations orchestrating the relief efforts  for details. Greta's donation has come after floods wreaked havoc in the North East Indian States of Assam, Meghalaya, as well as neighbouring Bangladesh, which shares a 4,000 km boundary with the region.
Over the past month, the North East Indian State of Assam has been persistently hit by inundation-causing torrential showers that are partly a manifestation of climate change.
In Assam, the death toll due to floods reached 104 on Tuesday with one more casualty being reported. At the same time, many rivers and their tributaries continue to flow above the danger level.
Large swathes of land 21 districts across the State have been inundated.
The floods in the northern parts of Bangladesh had killed at least 119 people by Monday, July 27. Of the victims, 96 people died of drowning, 13 of snakebites, eight of lightning, and one of diarrhoea.
Moreover, nearly 43,78,732 people were affected due to the floods in 31 out of the country's total 64 districts.
The inundation has reportedly caused widespread damage to habitation, crops, roads, and highways across vast swathes of the country.
Meanwhile, rescue and rehabilitation efforts in these regions are well underway, carried out by Government forces as well as non-Governmental organisations. The donations flowing from global icons like Thunberg is likely to highlight the plight of victims of floods—and climate change on a whole—to the entire world.             Sentinel