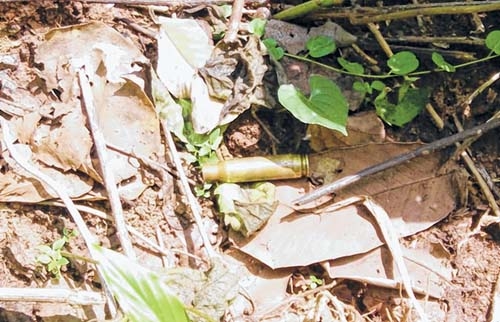 By Our Staff Reporter
IMPHAL, Jul 30: At least three Assam Rifles personnel have been killed in a  militant ambush in Chandel district while five others sustained injuries.
Meanwhile, the proscribed PLA (RPF), MNPF and ULFA (I) have claimed responsibility for the deadly attack.
The ambush took place at Khongtal village, about 35 Kms away from Chakpikarong sub-divisional headquarters at around 6.30 pm yesterday, sources informed.
Troops of 4 AR belonging to 28th Sector of the paramilitary force were returning to the Khongtal post on foot when they came under heavy firing which was preceded by bomb explosions.
As the troops were about to reach their post, three IEDs were detonated in quick succession before they were attacked with a volley of lathode bombs and live bullets.
Even as the AR troops retaliated, three of them were killed in the attack while five others sustained injuries, said the sources.
Of the three killed in the ambush, one was a Manipuri native. He has been identified as Rifleman Ratan Salam (33) s/o Ibomcha of Kakching Makha Leikai.
The two others have been identified as Havildar Pranay Kalita (38) s/o Hari Prasad Kalita from Ghatbar village of Barpeta district, Assam and Rifleman Methna Konyak (37) s/o Yiangam Konyak of Totok Chingnyu village of Mon district, Nagaland.
The injured personnel are Subedar Ngulkhotil Haokip (54), Naik Sikandar Singh, Rifleman Anish Kumar (27), Havildar Nitul Sarmah  (39) and Rifleman Sandeep Kumar (35).
Naik Sikandar Singh belongs to 13 Dogra Regiment while the others are personnel of 4 Assam Rifles.
All the dead and injured personnel have been brought to Leimakhong military hospital by helicopter.
While the injured personnel are being treated at the military hospital, bodies of the three slain personnel were taken to JNIMS morgue and post mortem has been completed, informed the sources.
Meanwhile, police have launched investigation into the incident after registering a case at Chakpikarong police station.
The National Investigation Agency (NIA) is likely to take over the case shortly, said the sources.
A joint press release issued by PLA Chief of Army Staff MM Ngouba, ULFA(I) Chief of Army Staff Paresh Asom and MNPF Defence Secretary Ruichumhao however claimed that four Indian military personnel were killed in the joint military offensive and many more were wounded.
While regretting that some natives of WeSEA were killed or wounded in the military offensive, the militant outfits asserted that joining Indian military forces is not right because allegedly roguish India makes enmity among the people of WeSEA.
They then appealed to all the people of WeSEA to withdraw from the Indian military forces and instead fight against the alleged roguish India for independence.
Internationally ‘the era of expansionism is over’ but not the Indian expansionism.
As the entire world has made up its mind against expansionism, the people of WeSEA have also been countering the expansionism of India and fighting for independence, the militant outfits added.