Waterlogging at MG Avenue poses threat to all 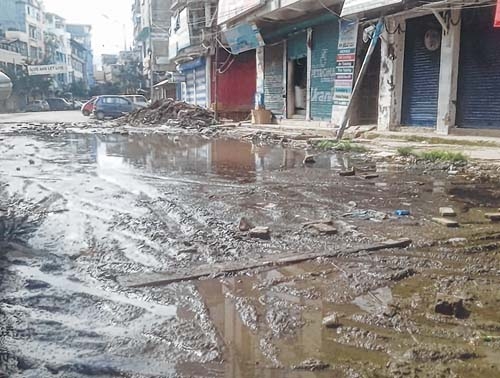 By Our Staff Reporter
IMPHAL, Jul 30: A waterlogged area at Mahatma Gandhi Avenue near Thangal Bazar is causing immense hardship to the locals as well as those attending to their workplaces.
The area just north of MG Avenue, one of the busiest places during normal days, is logged with water for almost a year now, said an employee of a bank in the area.
It may be noted that MG Avenue is packed with many financial institutions, bank branches and Government offices.
Lamenting that the Imphal Municipal Corporation (IMC) is ignoring the situation (waterlogging) in the area, he said that since the area is filled with water for months now, it may trigger a health hazard for the locals and people attending to their workplaces there.
He said he once noticed workers of the IMC  working in the area to clear and drain the water, but the work was abruptly stopped. Stating he doesn't know the reason for the IMC abandoning the work, the employee said the IMC should drain the water and manage the drainage systems around MG Avenue and bazar areas properly if the city is to truly become a smart city.
The waterlogged situation not only poses health hazards and problems to the locals, it is also making the city look dirty, he said.
He also stressed that the IMC should drain and clean the drainage systems before the bazar fully opens from the lockdown. Once the lockdown is lifted, there will be an increase in the traffic in the area with numerous vehicles plying the section causing problems. The area is also filled with broken bricks and other debris from nearby construction sites, he added.
On the other hand, a senior officer of the Municipal Administration Housing and Urban Development said that the waterlogging is suspected to have been caused by debris and silt clogging up the drainage system.
IMC had once cleaned the drainage system using desilting machines, however, there is a report that a section of the drainage system at Khoyathong is clogged with debris and other obstacles, said the senior officer adding instruction had been given to the IMC to clean the drainage system.
The delay in the drainage cleaning work may be because of the IMC's focus on facing COVID-19 issue now. Most of the workers of the IMC are now focusing on fighting COVID-19. However, the IMC will be directed again to clean the drainage system, said the senior officer.