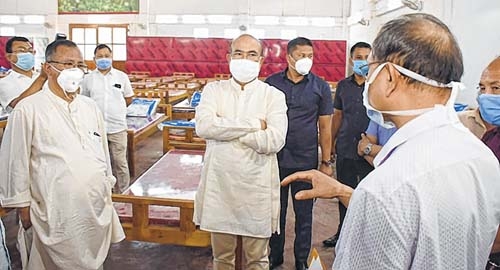 Imphal, Aug 1 (DIPR)
Chief Minister N Biren Singh along with Deputy Chief Minister Y Joykumar and Health Minister L Jayanta-kumar made a spot assess- ment of the preparations going on for opening a new COVID Care Centre at Manipur Trade and Expo Centre, Lamboi Khongnang-khong in Imphal West District today.
The centre, which will initially have 300 beds, is almost ready for inauguration, and the Chief Minister expressed satisfaction on seeing the work progress.
However, the Chief Minister instructed the con- cerned officials to upgrade it to a 1000-bedded centre as it has enough space for expansion. In the beginning, the Centre will have four blocks.
N Biren checked the furniture and other essential facilities including toilet facilities of all these blocks.
He also enquired the officials about electrification and power connections as well.
Later, the Chief Minister directed the officials to keep the centre ready for admission of COVID patients by tomorrow. As such, it is likely that the Centre would start functioning within a couple of days.
High ranking officials of the State Government including Dr Rajesh Kumar, who has been given the charge of the Chief Secretary, also accompanied the Chief Minister during the inspection.