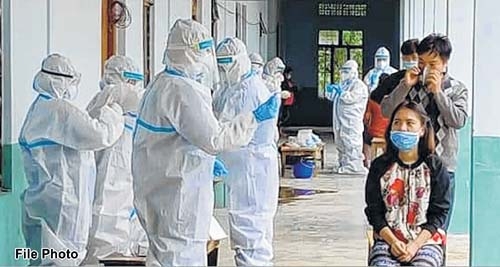 By Our Staff Reporter
IMPHAL, Aug 1: COVID-19 has claimed one more life in the State and as many as 135 persons including 80 CAPF personnel tested positive for coronavirus in the last 24 hours spiking the number of total cases in the State to 2756, said a report of the COVID-19 Common Control Room.
With the latest death of a 77 year-old man from Chandel district, the total death toll in the State has reached 6. The 77 year-old man died at CMC Koiren-gei. He was suffering from hypertension, Type 2 Diabetes Mellitus and Chronic Obstructive Pulmonary Disease.
He was admitted at CMC Hospital on July 30 with kidney related ailment and passed away at 10.30 am yesterday. However, he was tested for COVID-19 later and found to be positive for the virus late night at JNIMS yesterday.
The Imphal East district administration has decided to bury the deceased at Chingmeirong cemetery.
Doctors and staff who attended to the patient are stationed at the hospital and steps are being taken up to test their samples.
The total number of active cases now stands at 1051 while the number of recovered cases has reached 1699. The recovery rate is 61.65 per cent.
As per a report furnished by the COVID-19 Common Control Room, 55 persons including 43 males and 12 females tested positive for the virus during the last 24 hours. 37 of them have no significant travel history. Sources said the 37 cases with no travel history include 22 from Yairipok Tulihal and Ningthounai, and some from Khongman and Nilakuthi areas.
While 27 of them tested COVID-19 positive at JNIMS, 14 were tested positive at Babina Diagnostics. 12 tested positive at RIMS and one each tested positive at district hospitals of Bishnupur and Tameng-long.
Of the 55 cases, 31 are from Imphal East district, 9 from Imphal West, 4 from Bishnupur, 3 from Thoubal, 2 each from Kakching and Tengnoupal and 1 each from Kangpokpi, Tameng-long and Ukhrul district.
Meanwhile, a late report informed that at least 24 persons including security personnel staying at 1st MR Family Line and their family members have been tested positive for the virus.
As the number cases among the residents of the 1st MR Family Line has increased significantly, Imphal West district administration is stepping up its containment measures. Details of the steps to be taken up and testing required will be discussed tomorrow, said the sources.
In addition, sources also informed that at least 63 persons tested positive for the virus at JNIMS today, while seven from Thoubal were tested positive at RIMS. One case was also detected at Thoubal district on rapid antigen test, said the sources.
On the other hand, sources informed that seven family members of the Kamjong SP who has been tested COVID-19 positive have also been confirmed positive for the virus.
8 personnel of Mantripukhri CRPF have also tested positive. Meanwhile, several areas have been declared as containment zones.
The containment zones include areas of Nongangkhong in Thoubal district and Kakyai Mayai Leikai in Bishnupur district.
Certain areas of Thoubal Nongangkhong were sealed off after a resident tested COVID positive, said an order of the Deputy Commissioner of the district.
Similarly, areas of Kakyai Mayai Leikai were sealed off after one resident tested positive, said an order of the Deputy Commissioner, Bishnupur district. Meanwhile, the containment measures and restrictions imposed at Wangjing High School and surrounding areas have been lifted today as inmates of the quarantine centre opened at the school tested negative for COVID-19.
The body of the person from Thoubal Moijing who died of COVID-19 yesterday has been buried yesterday.