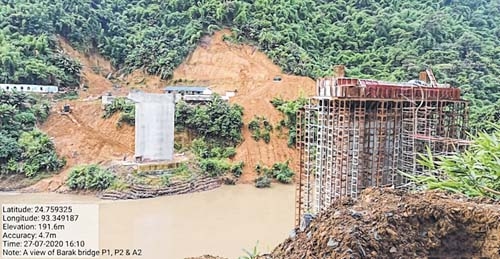 By Our Staff Reporter
IMPHAL, Aug 1: Cons-truction of two key bridges; namely Barak Bridge and Makru Bridge on NH 37 which is seen as the second lifeline of the State has been delayed by 16 months from the stipulated periods.
Even though it is said that the State’s law and order situation has improved remarkably and bandhs/blockades are few and far between these days, armed groups have been disturbing development works every now and then in hill areas.
With the Jiribam railway station already commissioned, the 220 Kms long Imphal-Jiribam highway (NH 37) is becoming a highway of paramount impor- tance for the State.
For decades, Imphal-Jiribam highway was lying in a neglected, primitive condition with Barak and Makru bridges breaking down at regular intervals.
The highway saw considerable improvement only during the last couple of years.
Even though there are instances of landslides and sinking of certain sections of the highway, particularly during rainy season, NHIDCL has been working to repair the damaged sections as promptly as possible.
Although the highway has seen considerable improvement since it was taken over by NHIDCL from BRO, Barak and Makru bridges still remain a major problem.
Bharatiya Infra Project Limited started construction of new Barak and Makru bridges since 2017 as its work agency with NHIDCL  as the implementing agency.
The total cost of the two bridges is around Rs 109 crore and they would have no pillars in the middle like Sanjenthong.
As per the agreement signed between the work agency and the project implementing agency, the two bridges should be completed by April 2019.
Notwithstanding the target of April 2019, Bharatiya Infra Project Limited, taking due note of the crucial importance of the two bridges, invested extra efforts to complete the bridge construction works six months ahead of the completion target.
But the project has been pushed 16 months beyond the completion target on account of frequent disturbances in the form of abduction of officials, imposition of bandh, blockade and ban.
Whereabouts of two officials of Bharatiya Infra Project Limited namely; Anjan Pandit (32) and Manish Das (35) could not be traced till date after they were abducted by unidentified miscreants from Khulbung village, near the railway bridge no 41 on July 25.
Sources said that both Manish Das and Anjan Pandit are supervisors. Although a complaint has been lodged at Jiribam police station in connection with the abduction, no authority has so far bothered to take up any concrete action to secure their safe release. The Government too knows that the bridge construction works have been delayed due to frequent disturbances. No official is willing to visit or stay put at the work sites on account of the security problem.
In the meantime, construction of Barak Bridge has been suspended at the request of local people who cited the COVID-19 pandemic.  Yet, construction work of Makru Bridge has been going on and construction of Barak Bridge would resume from August, said the sources.  In spite of these problems, maximum efforts would be invested to complete the project by December, the sources added.