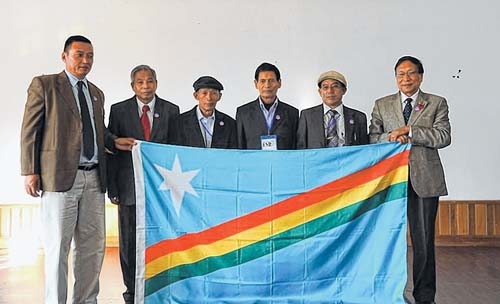 New Delhi, Aug 22
While the controversy of a fall-out between the National Socialist Council of Naga-land (Isak-Muivah) and interlocutor RN Ravi has further delayed the 23-year-old peace process, ThePrint’s Editor-in-Chief Shekhar Gupta said this suits NSCN(I-M) chief Thuingaleng Muivah.
Decoding the “mess in the peace process in Nagaland today” in episode 555 of ‘Cut the Clutter’, Gupta said, “If a settlement is reached, it is the end of the story for Muivah. And that is why he must delay this settlement for as long as he can, because the status quo suits him.”
He explained that if a settlement is reached, Muivah will become irrelevant in the new dispen- sation and will have zero hope of getting power in Nagaland.
Currently, Muivah has nearly 2,000 people carrying weapons sitting in a camp, called Camp Hebron, which is in the Peren district of Nagaland, and from there, the NSCN runs their empire, with Muivah as its chief. They also collect “taxes”, which Gupta said, was essentially extortion. In case a settlement is reached, all this will be lost.
Gupta said that Muivah has been a “past master at scuttling Naga peace deals” and the current situation was not new.
When the peace process was nearing a closure in 1966, headed by leaders of the Sema tribe, it was scuttled by Muivah.
He was appointed by AZ Phizo, who was at the time the general secretary of the party and in exile in 1965, and the first thing Muivah did was “scuttle the peace process”.
“Muivah put up the Angami tribe to believe that this peace deal was being negotiated by the Semas and that they will get a pre-eminent position in the new dispensation,” Gupta said. “So, the Angami commander-in-chief disagreed with the peace deal and it was cancelled.”
Then in 1975, as the Shillong peace accord was signed and many people started coming over ground, the Tangkhul leaders under Muivah were organised and trained.
“At that precise time, he (Muivah) was sending one more delegation to China with recruits for training and to get a fresh supply of weapons, which was duly given to them,” Gupta said.
“So he let Phizo know that he had no intention of going with this peace process and he repudiated this Shillong peace accord. So that was a second time Muivah scuttled the peace process,” Gupta added.
In 1980, Muivah carried out some kind of a coup within the Naga leadership.
“A lot of the leaders from the Phizo group were assassinated. Many of these civil society leaders were assassinated, because he had the power of the gun and he now controlled fully the Naga underground army.”
Gupta called the demand of the NSCN(I-M) of having a Greater Nagaland “utopian”, something that the Indian Government will “never allow”.
“The integration of Naga areas, which means Nagas in all the areas in adjoining States and even in Myan-mar, is a utopian idea,” he said.
“To say that Naga tribes integrated into one unit from adjoining States, is not going to happen as the other States will not give up its districts, which have the Nagas,” he said.
“So, Nagaland will still be left in its current geographical boundaries, that is the limitation of geography.”
Gupta further said that the demand for a Naga tribal parliament was again, a utopian idea.
“To have a Naga hobo (parliament), headed by Muivah having the legislative, legal administrative powers will never happen. No Government of India will ever allow that.”
Gupta, however, added that if it is just for “cultural organisation” of all Naga tribes, the Government of India will have no objection to it.
On the Framework Agreements of 2015, which has now become a point of contention with NSCN(I-M) which alleged that the Government of India promised them a sovereign structure but later made a U-turn, Gupta said this was just an excuse to shift the goalpost.
“Under the Indian Constitution, every State in India has shared sovereignty. In the federation, every citizen of India shares that sovereignty and that’s how it was explained to them (NSCN I-M). So if anybody thinks that India will create a second sovereign structure for a couple of million numbers (Nagas), nobody promised them that (and) this is really just an attempt of shifting the goalposts.”
“There is no way there’s going to be another Constitution. There is no way there’s going to be another flag. There’s no way any of this has been promised,” Gupta added. The Print