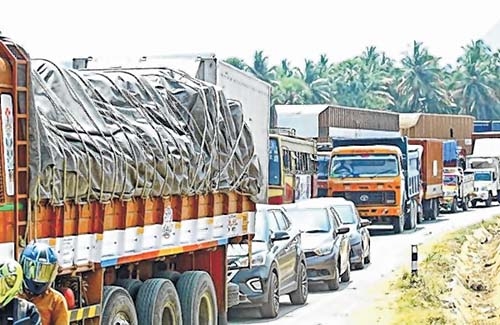 New Delhi, Aug 22
Union Home Secretary Ajay Bhalla has written to Chief Secretaries of all States explaining that there should be no restrictions on inter-State and intra-State move- ment of people and goods. His letter mentions that any such restriction would amount to a violation of guidelines issued earlier by the Ministry of Home Affairs during the Unlock phases.
The Home Secretary’s letter to States says that local level restrictions on inter and intra-State movement of people and goods are impacting supply chains nationwide resulting in disruption of economic activity and leading to unemployment also.
Bhalla has drawn attention to the fifth paragraph of Unlock 3 guidelines issued by the MHA. The Unlock-3 guidelines clearly state that there shall be no restrictions on inter-State and intra-State movement of people and goods. It also states that no separate permission or approval or e-permit will be needed for such movement for cross land border trade under treaties with neighbouring countries.
Several reports of local level restrictions on movement being imposed by various districts and States have made their way to the Centre, he has written in the letter. The letter claims such restrictions which are different in different States are leading to problems in inter-State movement of goods and are thereby impacting supply chains across the country.
The Home Secretary said restrictions amount to violation of guidelines issued by the Ministry of Home Affairs under provisions of the Disaster Management Act, 2005.
The Home Secretary has requested State Governments to lift the restrictions imposed due to the COVID-19 pandemic and to ensure that MHA guidelines issued during the phases of unlocking the country are followed.
Prime Minister Narendra Modi had first announced a nationwide lockdown with effect from March 25 to combat the coronavirus pandemic which was subsequently extended till May 31.
Since June 1, the unlock process began with the opening up industrial activities and offices across the country. Hindustan Times