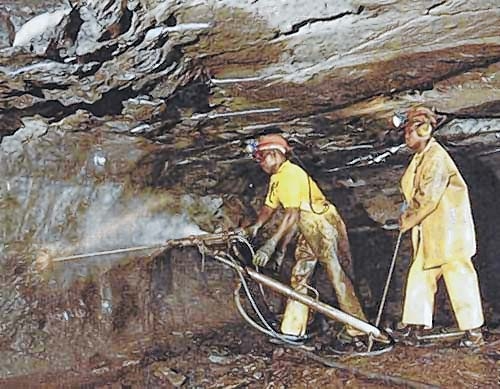 IMPHAL, Aug 30
The Joint Students’ Co-ordination Committee (JSCC) which consists of AMSU, MSF, KSA and SUK has demanded the Govern-ment to stop its plan to mine minerals in Manipur without consent of the people.
The JSCC also demanded annulment  of all MoUs signed between the State Government and various mining companies without consultation and consent of the people.
According to a press release issued by JSCC, the Geological Survey of India (GSI) estimates around 20 million metric tonnes of limestone deposits in Ukhrul, Tengnoupal and Chandel districts. The Indian Bureau of Mines 2013 report indicated that Manipur has 6.66 MT of chromite deposits in the ophiolite belt of Ukhrul, Kamjong, Tengnoupal and Chandel districts.
It is matter of grave concern that the Government of Manipur signed seven MoUs for chromite mining with M/s Sarvesh Refractories Pvt Ltd, Rourkela; M/s Rourkela Minerals Pvt Ltd,  M/s Kotak Resources, Mumbai; M/s Gulf Natural Resources, Gurgaon; M/s Visa Steel Ltd, Odisha; M/s Manipur Mines and Minerals Pvt Ltd and M/s Balassore Alloys Ltd, Odisha etc in 2017 without ever consulting the people of the State.
The State Government also signed four MoUs for limestone exploration, mining and to establish cement plant with M/s Super Ores, Guwahati, M/s Gulf Natural Resources, Gurgaon, and M/s Ramung Enterprises, Imphal without consultation and consent of the people, JSCC said.
The Gulf Natural Resources Private Limited, Gurgaon signed a deed of agreement for mining of chromite with the Village Authority of Kwatha village on October 5, 2016. The Rourkela Minerals Company Private Limited (ROMCO) signed an agreement with the Government of Manipur on February 23, 2019 for a mining lease for 20 years over an area of 85 hectares in Shingcha-Gamnom village in Ukhrul district, it continued.
Further, the Government approved a mining lease of 85 hectares in 2007.
The mining company, M/s Sarvesh Refractory Private Limited (SRL) has been contracted by the State Government to mine Chromite from Lunghar and Sirohi villages of Ukhrul district. The mining lease area is 132.781 hectares in Sirohi-Lunghar with targeted production capacity of 10531 tons per annum and is under process to seek environment clearance from the MOEFCC for mining of Chromium.
The GoM has leased out the limestone quarry to M/s Super Ores and Mines Private Limited for 20 years, JSCC said.
The JSCC further said their concerns include non-recognition of rights, lack of free, prior and informed consent, environmental impacts and lack of appraisal of impacts.
“Mining companies usually fail to uphold the rights of communities. The plunder of land and natural resources in Manipur through mining will only lead to weakening of Manipur’s economy”, it said.
“The limited royalty from mining will hardly reach the people. Such royalties will be disproportionate to the loss of land and resources. The mining plan by Gulf Resources in Kwatha village failed to recognize communities’ rights over their land and resources,” it said.
JSCC said that the ongoing efforts to mine Chromite and Limestone from Ukhrul, Kamjong, Tamenglong and Chandel districts failed to take consent of the people of Manipur. No consultation with communities has been carried out by the Government.
The mining plan at Ukhrul, Kamjong, Tengnoupal districts are marred with absence of forest clearance and environment clearances. The project for mining at Singcha was approved in 2017 and 2018 even without receiving environment and forest clearance for the project, it alleged.
Manipur is indeed identified as a zone of confluence of three major species streams namely the Malayo-Polynesian species, the Tibeto-Chinese species, and the Indian sub-continent species. Extensive mining operations in the entire area of Kwatha, Singcha-Gamnon, Mailiang, Hundung, Phangrei, Lunghar etc will seriously affect the biodiversity, environment and the livelihood of the villagers while mining companies profit from the destruction, it said.
The previous Chromium mining plan at Phangrei in Ukhrul district was abandoned after locals protested the mining plan due to the health and environmental impacts of the project.
The pre-feasibility study report (PFR) prepared by the mining company stated that the mining lease area at Lunghar is devoid of any forest land or agricultural land and the entire land is categorized as unclassed Government land despite the fact that Sirohi and Lunghar villages are one of the most forested areas of Manipur along with Shingcha-Gamnon, it added.