Naga pact soon as Govt believes it can bypass NSCN(IM) 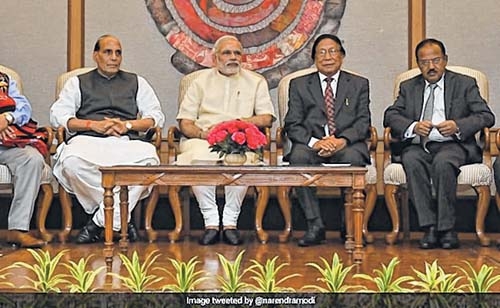 NEW DELHI, Aug 30
The long-pending Naga framework agreement is set to be formalised soon irrespective of whether or not National Socialist Council of Nagaland leader Th Muivah is part of the peace deal as the Centre feels it has adequate backing of other armed groups and the influential Nagaland Gaon Bura Federation.
Muivah's insistence on Nagaland getting a "flag and constitution" has held up the formal end of the political discussions, which have not concluded despite a ceasefire agreement signed by the Centre and NSCN as far back as 1997. The current framework agreement was signed in 2015 with the NSCN agreeing to accept that Nagaland was part of the Indian Union. But the aging leader runs a serious risk of being left stranded as the Centre is pressing ahead with its plan to sign a peace agreement with other groups as well as civil society.
A statement directly critical of NSCN issued on Friday by Gaon Bura assumes significance in view of reports of differences between Naga groups and the Centre's interlocutor and Nagaland Governor R N Ravi. "There is a perpetual tendency within NSCN(IM) leadership to brand Naga leaders, tribes, organisations, other civil societies as anti-Nagas and traitors for not toeing their political ideology. This is a mockery of Nagaland for Christ."
Backing Ravi's role, the Gaon Bura said, "NGBF observes that the demand for replacement of interlocutor is unjust and unte- nable due to the fact that he is also the GOI interlocutor with other negotiating groups."
A top source said reports of the peace process running into rough weather are part of the NSCN's "negotiating tactics" and do not represent the actual situation. "It has been made clear to Muivah that the demands for a flag and constitution will not be accepted and it is time for him to make up his mind," the source said.
"Muivah's obstruction were helped because a whole set of players developed a vested interest in the conflict industry represented by the longest-running insurgency. That phase is over and we are ready to call his bluff if he does not come around," said a senior source, adding that time is running out fast for the Naga insurgent.
After the 2015 framework agreement, formali- sation of the peace pact dragged on as NSCN raised several issues. As progress was slow, the Centre widened the ambit of nego- tiations to include smaller armed groups and the NGBF, which represented tribes in Nagaland as compared to Muivah who is a Tangkhul Naga from Manipur. Resentment over NSCN leader's recalcitrance runs deep even among his ranks, claimed sources.
The Centre is basing its confidence on action taken over recent months to ensure that NSCN armed commanders and cadres are largely confined to camps and do not carry on with their "parallel Government." The Bura federation, which represents Nagaland tribes and hundreds of village heads, is keen to settle the issue without further delay as it wants a formal end to the militancy.
The source said that NSCN armed cadre is also not so enthused over a return to a full-fledged armed struggle with a section understood to be in touch with the Centre. It is the Centre's understanding that Muivah, while seeing the lack of support for more struggle, is exploring the possibility of dragging on matters given the "de facto" influence he has enjoyed in the State. TNN