15 dead including both pilots as plane skids off 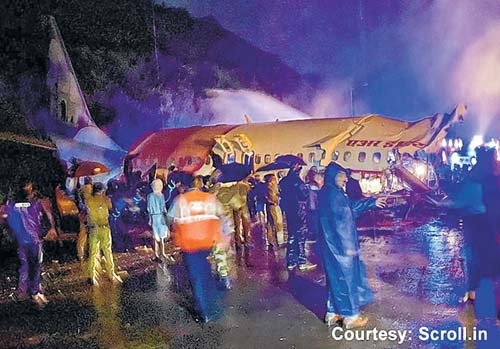 N Delhi/Thi'ram, Aug 7
At least 15 people were killed after an Air India Express plane with 190 on board from Dubai skidded off the runway and broke in two while landing at Kerala's Kozhikode on Friday amid heavy rain, the police said.
Among those killed were the two pilots of Flight IX-1344, authorities said. Four people are still stuck inside, the Kerala Police chief said.
Most on board have been evacuated and at least 50 injured, including 15 in serious condition, have been taken to hospital, authorities said.
There were 174 passengers, 10 infants, two pilots and four cabin crew members on board the aircraft.
The flight was part of the Vande Bharat programme that has been bringing back Indians from abroad amid the coronavirus pandemic.
Television images from the site showed part of the fuselage of the Boeing 737 jet ripped apart with debris strewn all over.
The incident took place amid very heavy rainfall in the area around 7:40 pm. A greater tragedy was averted as the plane did not catch fire. Emergency services personnel were seen working in the dark and spraying the wreckage with water.
According to flight-tracking website FlightRadar24, the aircraft circled the airport several times and made two attempts to land.
The Kozhikode airport is one of Kerala's most prominent international terminals and handles a significant number of flights from abroad, Congress lawmaker Shashi Tharoor told NDTV.
Union Home Minister Amit Shah tweeted, "Distressed to learn about the tragic accident of Air India Express aircraft in Kozhikode, Kerala. Have instructed NDRF (National Disaster Response Force) to reach the site at the earliest and assist with the rescue operations." Kerala Chief Minister Pinarayi Vijayan tweeted: Have instructed Police and Fire Force to take urgent action in the wake of the plane crash at the Kozhikode International airport (CCJ) in Karipur. Have also directed the officials to make necessary arrangements for rescue and medical support. Kerala has been hammered by heavy rainfall through the day that triggered landslides and left at least 15 people dead. Around 50 others are still feared trapped in debris after a landslide in the hilly Idukki district early Friday. NDTV