Centre engages NSCN-IM in the last leg of peace talks 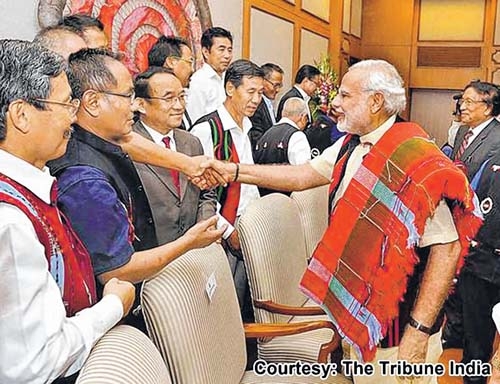 New Delhi, Aug 7
The Centre on Friday resumed negotiations with the NSCN (IM) leadership as part of the last leg of talks for Naga peace, as the efforts are on to resolve the three contentious issues — flag, constitution and territory — and ink a “final settlement” before Independence Day.
The sources in the Ministry of Home Affairs (MHA) said the talks between the senior officials and the NSCN-IM leaders, led by its 86-year-old general secretary Thuingaleng Muivah, are being held at an undisclosed location in the National capital, where representatives of Assam, Manipur and Arunachal were also present.
“The presence of the representatives of three North Eastern States is significant, as the NSCN-IM has been claiming parts of their territories for “Greater Nagalim.
This has so far been a major stumbling block in stealing a final settlement,” a senior MHA official said.
The NSCN-IM has all along been demanding territorial integration of all Naga inhabited areas of the North East region of the country.
Sources said as the senior officials, including the concerned ones in the MHA, have been negotiating the final settlement, Union Home Minister Amit Shah, who has been admitted to a hospital after being tested COVID-19 positive, has constantly been monitoring the progress made at the meeting.
Meanwhile, the Naga National Political Groups (NNPGs), a conglomerate of seven other organisations, which is also part of the dialogue process, has already said it had successfully closed its negotiations with the Centre.
Tribune News Service