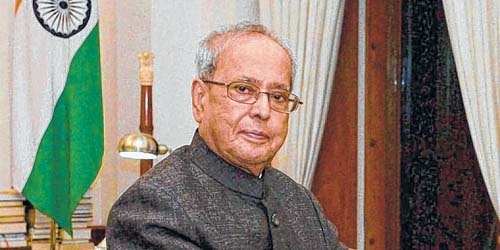 NEW DELHI, Aug 31
Former President of India Pranab Mukherjee passed away on Monday, confirm-ed his son Abhijit. He was 84.
Taking to Twitter, Abhijit wrote, "With a heavy heart , this is to inform you that my father Shri Pranab Mukherjee has just passed away inspite of the best efforts of doctors of RR Hospital & prayers, duas & prarthanas from people throughout India ! I thank all of you".
Mukherjee, a Congress stalwart, was admitted to the hospital in Delhi Cantonment on August 10 and was operated the same day for removal of a clot in his brain.
The condition of the former President declined on Monday morning after he suffered a septic shock due to his lung infection, the Army's Research and Referral Hospital said.
The Bharat Ratna awardee had also tested positive for COVID-19 at the time of his admission and later developed a respiratory infection
Pranab Mukherjee was the 13th President of India from 2012 to 2017. He is survived by two sons and one daughter.
Extending condolences, President of India, Ram Nath Kovind wrote, "Sad to hear that former President Shri Pranab Mukherjee is no more. His demise is passing of an era. A colossus in public life, he served Mother India with the spirit of a sage. The Nation mourns losing one of its worthiest sons. Condolences to his family, friends & all citizens."
Prime Minister Narendra Modi, wrote "I was new to Delhi in 2014. From Day 1, I was blessed to have the guidance, support and blessings of Shri Pranab Mukherjee. I will always cherish my interactions with him. Condolences to his family, friends, admirers and supporters across India. Om Shanti".
"I join the country in paying homage to him," wrote Congress leader Rahul Gandhi.