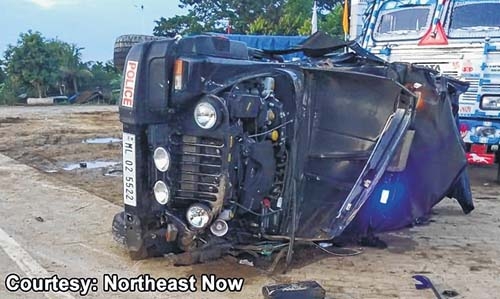 SHILLONG Sep 13
The pilot car of Meghalaya Power Minister James K Sangma, who tested positive for COVID-19 during a Rapid Antigen Test at Imphal on Saturday, met with an accident at Nagaon in Assam on his return journey to Shillong.
The accident took place early morning on Sunday.
Four of the Constables, who were in the Meghalaya Minister’s pilot car, were injured in the accident.
Confirming the news, Nagaon Superintendent of Police Gaurav Abhijit Dilip told Northeast Now, “The accident took place near Nonoi. The pilot car hit a standing truck from behind. Four policemen were injured.”
The Nagaon police chief informed that all the injured Meghalaya Police personnel were treated  at the Nagaon Civil Hospital.
Nagaon Police arranged an alternative pilot car and James Sangma left for Shillong, IPS officer Dilip said.
“Now, the 4 policemen were also released from the hospital, and left for Shillong,” he added.
The registration number of the pilot car, which met with the accident is ML-02-5522.
Meghalaya Police in a statement issued on its Twitter handle said the accident occurred at 4.55 on Sunday morning. “Today, around 4.55 am, the convoy of Shri. James PK Sangma, Hon’ble Power Minister met with an accident in Nagaon, Assam,” Meghalaya Police tweeted.
“Four injured police officials were immediately sent to Civil Hospital, Nagaon & Hon’ Minister has been escorted to his official residence in Shillong,” it added.
According to a statement issued by the Assistant Inspector General of Police (A), Meghalaya, GK Iangrai, two vehicles were damaged in the accident.
“At present, both the damaged vehicles have been taken to Nonoi outpost for observation of legal procedures and police officials of the State are coordinating with the counterparts of Assam for further necessary action,” it said.
James K Sangma, who is also the elder brother of Meghalaya Chief Minister Conrad K Sangma, after testing positive in Manipur on Saturday, decided to undergo RT-PCR retest in Shillong. Details about the accident are awaited. James went to Manipur to accompany Meghalaya Chief Minister Conrad K Sangma for some political engagements and to inaugurate the new National People’s Party (NPP) office at Imphal on Saturday.
Sources said, at the Bir Tikendrajit International Airport at Imphal, the swab sample of the Meghalaya Power Minister tested positive for COVID-19 during Rapid Antigen Test, but Chief Minister Conrad Sangma tested negative.
The Meghalaya Minister is asymptomatic, sources added.
On July 24, James and his family had tested negative, after his driver tested positive during a Rapid Antigen Test.