Two from Manipur held for lifting over 200 cars 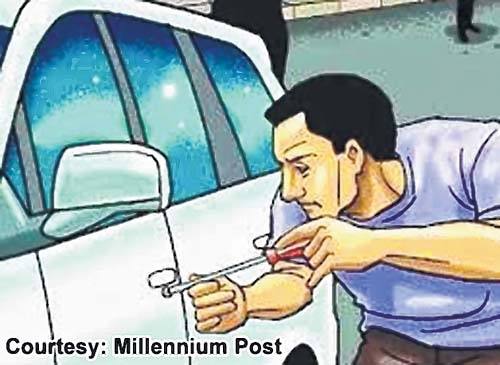 NEW DELHI, Sep 13
The Faridabad police have arrested two men — including a 24-year-old postgraduate posing as an Indian Police Service (IPS) officer — for their alleged involvement in over 200 vehicle theft cases from Delhi-NCR.
According to the police, the suspects were identified as Abung Mehtab, the mastermind who posed as the Assistant Commissioner of Police (ACP) of the National Investigation Agency (NIA), and Kabir Khan — both hailing from Manipur. They were arrested from the Delhi-Faridabad border on Thursday while allegedly trying to cross the border in a stolen car, the police said.
The police allegedly recovered one country-made pistol and six different kinds of identity cards from their possession. They were produced before the Court on Friday and taken on an eight-day police remand, said the police.
OP Singh, Faridabad Commissioner of police, said that the suspects are good friends. They used to fly from Imphal to the National capital and drove back with stolen cars. “Mehtab took advantage of his physical appearance and used his fake identity cards to skip paying tolls and avail free stays in hotels while travelling. When anyone asked him to show his identity card, he presented a fake IPS card. Even during lockdown, he travelled in different vehicles using a fake pass. Since he wore a uniform, he never got caught,” he said.
The police said they would steal at least 10-15 cars every month from Delhi but, during the lockdown, they managed to steal only eight cars. They sold them to a dealer in Thoubal, Manipur. Mehtab has completed his M Phil in Sociology from Manipur, said the police.
Singh said the duo is involved in more than 200 car thefts of all high-end segment luxury cars. Mehtab used to allegedly drive while returning to Manipur with the stolen car. They used to reach their home town within three days covering a distance of nearly 2,500 kilometres. “They used to drive to Manipur and asked for an exemption at toll booths using the fake identity cards through Uttar Pradesh and Bihar. The suspects, along with their close aide who deals in second-hand cars, would tamper with the chassis number of the vehicles and forged documents to get them registered with transport authorities in Manipur. We are probing the involvement of car dealers and transport authorities in the racket,” he said.
A case under sections 170 (impersonating a public servant), 419 (punishment for cheating by impersonation), 420 (fraud), 467 (forgery of valuable security), 468 (forgery for purpose of cheating) and 471 (using as genuine a forged document) of the Indian Penal Code (IPC) and sections of Arms Act has been filed at Sarai Khwaja police station.
The crime unit of Faridabad’s Sector 30 team led by Inspector Vimal Kumar arrested the duo. Singh said the mastermind had a collection of pictures stored on his mobile phone wearing a police uniform holding AK-47 and other weapons to influence people on social media.