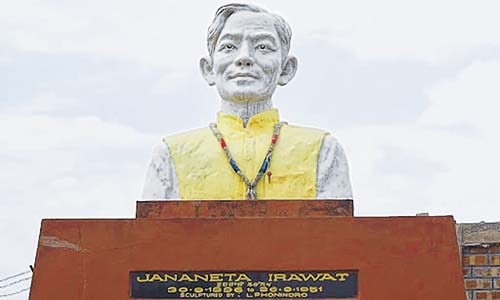 By Our Staff Reporter
IMPHAL, Sep 15: Jananeta Hijam Irabot Singh Birthday Celebration Committee has announced that the 125th Birth Anniversary will now be celebrated year-long in and outside the State starting from September 30.
Programmes to recall the works and activities undertaken by the late leader during his lifetime, discussions, lectures, release of books related to him, cultural activities, games and sporting events and literary programmes and competitions will be organised as a part of the year-long celebration, the committee said in a statement.
The formal inaugural function to kick off the year-long celebration will be held on September 30 this year at Manipur Dramatic Union's hall, Yaiskul Police Lane, a place which has a significant link with the life and works of the late leader. In view of the ongoing COVID-19 crisis, the function will be held from 11 am to 1 pm in the simplest manner with floral tributes to the photo of the late leader as the main event, it said.
"Lamyanba Irabot" play presented annually by Manipur Dramatic Union since the 100th birth anniversary observation of the CPI leader has also been cancelled this year, it added.
While praising the State Government for formally recognising Irabot Day (September 30) as a State function and installation of a park opposite to the Manipur Legislative Assembly along with a bust of the leader, the celebration committee also urged the State Government to form a State level celebration committee in connection with this year's birth anniversary celebration.