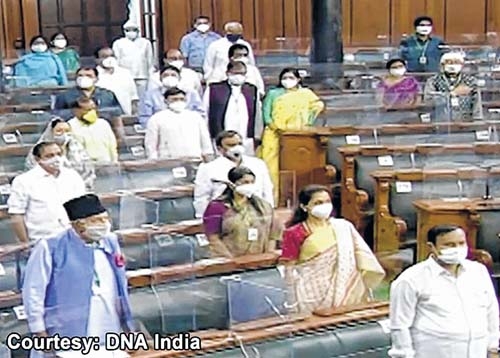 New Delhi, Sep 14
Twenty-four members of the Lok Sabha tested positive for the coronavirus disease (COVID-19) on the first day of Parliament’s Monsoon session, Secretariat officials told Hindustan Times on Monday. Junior Railways Minister Suresh Angadi, the BJP’s Meenakshi Lekhi, Anant Kumar Hegde, Parvesh Sahib Singh, Rita Bahuguna Joshi and Kaushal Kishore were among the 24 MPs who have contracted the viral disease.
The COVID-19 positive Lok Sabha members have informed the Secretariat about their health status.
The reverse transcriptase-polymerase chain reaction (RT-PCR) test, considered the most accurate for the diagnosis of the coronavirus disease, would continue till the next week for the members of Parliament, officials said.
As the viral disease continues to pose a threat to the session, many senior MPs, cutting across political lines, have decided against attending the proceedings.
On the first day of the delayed session that was attended by 359 members, nearly 200 were present in the Lok Sabha chamber and a little over 30 were seated in the visitors’ gallery located above the main chamber. Plastic shields were installed in front of the members’ benches in order to ensure distance.
A giant TV screen in the Lok Sabha chamber showed very few members occupying seats in the Rajya Sabha chamber, the other venue where the Lower House MPs have been accommodated keeping in mind physical distancing norms.
Benches that usually accommodate six members had a numbered seating plan for only three.
The Parliament session is being held in two shifts — the Rajya Sabha in the morning and the Lok Sabha in the afternoon — with members of both Houses spread across the two chambers and galleries. On the opening day, however, the Lok Sabha was held in the morning shift and the Rajya Sabha in the afternoon.
Hindustan Times