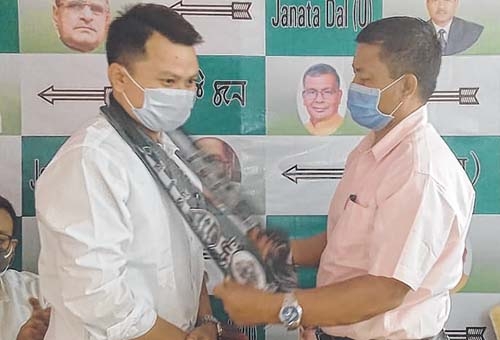 By Our Staff Reporter
IMPHAL, Sep 15: Janata Dal-United (JD-U) has not yet taken any decision to field candidates in the by-election to the 11th Manipur Legislative Assembly, said the party’s State unit president Hangkhanpao Taithul.
Speaking to media persons at their New Checkon office this afternoon where newly elected office bearers of JD-U Yuva, Manipur State unit were sworn in, Hangkhanpao said that JD-U believed the by-election would further strengthen NDA.
The by-election has been discussed at the State level and there are also three candidates who have potential to win their respective Assembly seats, he claimed.
“At the same time, we have an uneasy feeling whether non-NDA candidates would take advantage when JD-U fields its own candidates. As such, the matter has been referred to the party’s high command”, Hangkhanpao said.
Regardless of whether JD-U would field its candidates or not, the party would take part in the by-election physically and politically, he said.
Notably, as many as 13 Assembly seats are currently vacant following disqualification of some MLAs and resignation by some others.
However, JD-U would definitely put up maximum number of candidates in the forthcoming ADC and urban local body elections, Hangkhanpao said.
As a part of the party’s preparation for the ADC and urban local body elections, JD-U Yuva (youth wing), Manipur has been re-constituted and the new office bearers have been sworn in today, he said. Altogether 15 office bearers of the youth wing led by its president Apollo Singh Kshetrimayum were sworn in today, he added.