To crack down on illicit poppy cultivation... DGP seeks co-operation from village chiefs 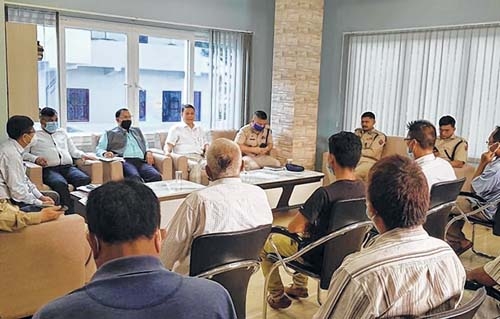 By Our Staff Reporter
IMPHAL, Sep 15: DGP LM Khaute today held a meeting with the village chiefs of 16 villages of Kangpokpi district at the Police Headquarters (PHQ) in connection with illicit poppy cultivation issue.
The meeting was also attended by other senior police officers including Addl DGP (Int) Ashutosh Kumar Sinha, IGP Zone-III Lunsieh Kipgen, IGP (Int/NAB) K Radhashyam Singh, DIG Range–III K Kabib, SP Imphal East District H Jogeshchandra Singh, SP Kangpokpi District Hemant Pandey and SP (Narcotics and Affairs of Border) W Basu Singh.
The State Police Department has appealed to the village chiefs not to cultivate illicit poppy and ganja plants and also to co-operate with the police in the drive against drugs including poppy and ganja cultivation.
The village chiefs were also informed about the penal provision under ND&PS Act for involvement in such activities.
The village chiefs while sharing their grievances strongly requested for alternative means of livelihood and developmental works in their villages.
Responding to their grievances, the police chief informed them to furnish details of alternatives means of livelihood of their respective villages through the SPs concerned.
The meeting started at 11.30 am and continued till 1.30 pm. Another such meeting will be held on September 17 at  11.30 am at the Police Headquarters.