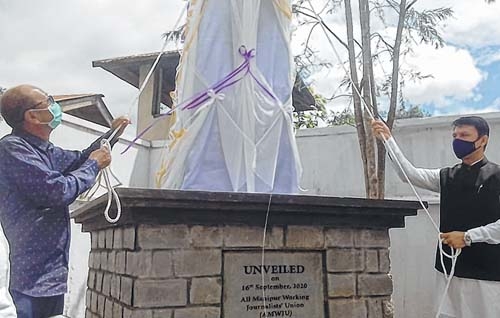 By Our Staff Reporter
IMPHAL, Sep 16 : Unveiling a journalists' memorial pillar marked the 47th foundation day observation of the All Manipur Working Journalists' Union at the office of Manipur Press Club, Majorkhul today.
Assembly Speaker Yumnam Khemchand and Education Minister Dr Th Radheshyam attended the solemn but significant function as the chief guest and guest of honour respectively.
The memorial pillar is inscribed with the names of the founding members of AMWJU and journalists who are no more.
Along with unveiling the memorial pillar, distributing prizes to reporters who bagged the best coverage report of the one day media campaign on the theme ‘Save Nambul’ on July 2, marked the function.
Speaking at the function, Speaker Y Khemchand stressed on the important role of the media in taking society and the Government on the right path.
The Speaker however said that the media should only rely on the truth and not exaggerate while reporting on anything.
Acknowledging the media as the fourth pillar of a democracy, Education Minister Dr Th Radheshyam said that this premise should rest on its freedom and its choice to be neutral on any issue.
The Minister urged the media fraternity not to compromise on the truth and to remain neutral at all cost.
Acknowledging that social media has become an important medium which can impact on society, the Minister said that despite its growing importance there are some elements who do not hesitate to mislead the people with false reports and inputs.
Such practise can portray Manipur in a negative light in front of others and this is not desirable, he said.
The Minister urged all to think twice before uploading any information or opinion on the social media which can mislead people and throw Manipur in the wrong  light.
Unverified reports should not be entertained, suggested the Minister and urged all media houses to first verify and then publish.
Dr Th Radheshyam also acknowledged the immense responsibilities shouldered by AMWJU, especially during critical periods in the last 47 years.
President of AMWJU Bijoy Kakchingtabam who also addressed the gathering said that earlier it was thought that the memorial pillar would be ready by September 16 last year. But now that it has finally seen the light of the day means a lot to the media persons, he added.
The AMWJU president thanked all those who contributed towards making the memorial pillar a reality.
The decision of the State Cabinet to hike the monthly pension of retired journalists to Rs 8000 per month was also lauded.
Director of DIPR H Balkrishna, officers of the department, senior journalists and family members of journalists who are no more also attended the function.