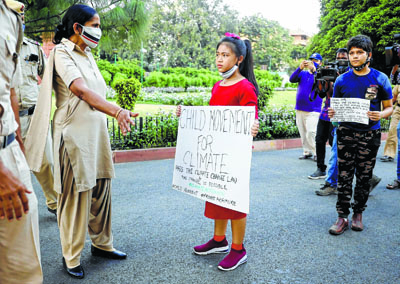 New Delhi, Sep 24
Eight-years-old climate activist Licypriya Kangujam stormed the Parliament House of India to pass the climate change law in the ongoing Parliament session in New Delhi on Wednesday. However, police tried to stop her rally and later protested outside the Parliament House addressing her three demands to PM Narendra Modi and MPs. She was joined by other young climate activists, like twelve years old Arav Seth.
This is not the first time Licypriya is protesting outside the Parliament House to pass the climate law, said a press release from Team Licipriya adding that the young climate activist had also addressed the world leaders at the United Nations Climate Conference 2019 (COP-25) in Madrid, Spain last year to take immediate climate action to save the planet.
Speaking to the media, Licypriya said, “I am coming here to tell our Hon’ble Prime Minister Mr Narendra Modi and our MPs to pass the climate change law as soon as possible.”
She further said that carbon emissions and greenhouse gases can be controlled if the climate change law is passed.
“You can just see in Delhi how air pollution is so dangerous. Even children can’t move out of their home. The Government will announce that there will be holidays for three days, five days and again ten days but this is not the solution. Our leaders are just busy blaming each other instead of finding long term solutions. They are just delivering the speech but they are not doing any action. I want our leaders to do more action otherwise our future will be dying soon. We want climate action now without wasting any more time”, she replied to a media question on Delhi air pollution.
Licypriya is the founder of the climate justice organization "The Child Movement." She has been raising her voice for over two years with three demands - to pass the climate change law, to include climate education compulsory in the school curriculum and to plant minimum ten trees every year by each student of India, said that statement adding that Licypriya is also demanding clean air to breathe.
Later, she also urged Congress MP Shashi Tharoor to fulfil his promise of March 7, 2020, of bringing up her three demands in the Parliament session. She even protested outside the official residence of Shashi Tharoor to raise her concern in the ongoing Parliament session. However, Shashi Tharoor sent her a letter stating that he will be unable to raise the issues this time in the Parliament as Lok Sabha Session has been shortened because of the prevailing COVID19 situation in the country.
She also met with the titular king of Manipur and lone Rajya Sabha BJP MP Maharaja Leishemba Sanajaoba about the issue. The Maharaja also shared several initiatives taken by him to Licypriya. The young climate activist also took the blessings of the titular king of Manipur.