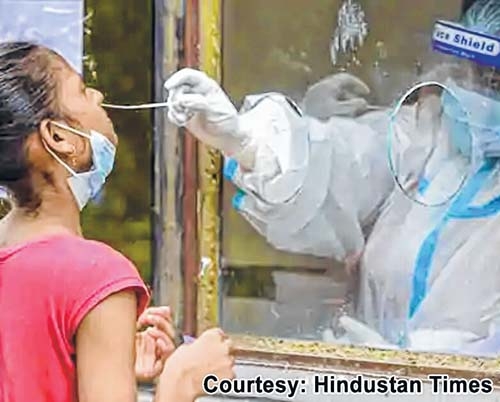 New Delhi, Sep 5
All people living in containment zones should be tested using rapid antigen testing (RAT) kits, especially in the cities that are badly affected by the coronavirus outbreak, top medical body - the Indian Council of Medical Research (ICMR) - has stressed in its new advisory. It has also recommended "testing on demand" for "all individuals undertaking travel to other countries or Indian States mandating a negative COVID-19 test at the point of entry". The States, however, can use their discretion to modify the approach, according to the fresh advisory.
"If an individual develops symptoms following a negative RAT (Rapid antigen tests), an RT-PCR test should be done," as per the nodal body's new list of guidelines-"Advisory on Strategy for COVID-19 Testing in India''. The fresh list comes as India - the third worst-hit country by the pandemic-passes 4 million coronavirus cases.
"100 per cent people living in containment zones should be tested by rapid antigen tests, particularly in cities where there has been widespread transmission of the infection," it underlines.
No emergency procedure (including deliveries) should be delayed for lack of tests, and pregnant women should not be referred for a lack of testing facility, it further stresses.
The ICMR is the top body in India for the formulation, coordination and promotion of biomedical research and is one of the oldest medical research bodies in the world.
In the new advisory, the ICMR has also listed measures to priortise methods of testing. "For routine surveillance of containment zones, antigen tests should be first priority. For routine surveillance of non-containment zones, RT-PCR tests should be first priority," the ICMR guidelines say.
"For hospital settings, RT-PCR tests should be first priority. For "testing on demand", State Governments can decide modalities," it highlights.
Across the country over 68,000 have died due to Covid so far. Maharashtra, Andhra Pradesh, Tamil Nadu and Karnataka are the worst-hit States.
NDTV