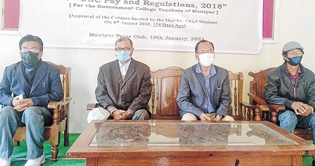 By Our Staff Reporter
IMPHAL, Jan 10: The Federation of Government College Teachers’ Associations (FEGOCTA), Manipur has served an ultimatum to the Government to implement 7th UGC Pay and Regulation, 2018 by January 27.
If the Government fails to issue the necessary order for implementing the 7th UGC Pay by January 27, FEGOCTA will resume the agitation they suspended till the order is issued, said its general secretary Dr N Somorendro at Manipur Press Club today.
The 7th UGC Pay and Regulations, 2018 was approved by the State Cabinet on August 6 last and since then the Government has not yet issued any order even after a lapse of about 5 months. This, he said, is unprecedented and total neglect of the National Policy of UGC (University Grants Commission) and principle of good governance.
FEGOCTA had held several meetings with Education Minister and Government officials and submitted representations repeatedly on the issue. The teachers’ body had last submitted a representation to Chief Minister N Biren Singh on January 2 for his intervention, but so far there has been no positive action, Somorendro said, adding that the 7th Pay has already been adopted for other employees of the State Government.
He mentioned that three years ago, the Union Cabinet headed by Prime Minister Narendra Modi had approved the 7th UGC Pay for teachers of universities and colleges of India. The MHRD on November 2, 2017 had notified all the States for adoption of the 7th UGC Pay.
Except Manipur, all the other States including BJP ruled ones have already implemented the 7th Pay. Since December 2018, FEGOCTA has been demanding the implementation of the 7th UGC Pay and Regulations, 2018. As the Government failed to implement the 7th Pay despite repeated appeals, FEGOCTA had launched a series of agitation and protest demonstrations denouncing the Government apathy towards the teachers.
If the Government fails to issue an order implementing the 7th UGC Pay by January 27, FEGOCTA will resume its suspended agitation from the next day till the order is issued. The college teachers will boycott online and offline classes, NAAC and other academic activities and hold different forms of the democratic protests from January 28.
The decision to serve the ultimatum and resume agitation was taken during the executive committee meetings of the FEGOCTA held on January 8 and 9. The body is also submitting a memorandum to Chief Minister N Biren Singh, he said.