Biren underscores role of youth in War on Drugs 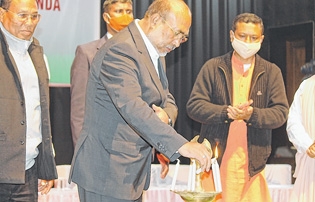 By Our Staff Reporter
IMPHAL, Jan 12: Chief Minister N Biren has stated that the youth need to take pro-active roles in the BJP-led Government’s War on Drugs.
Speaking as chief guest at the National Youth Day observed today in the auditorium of Manipur Film Development Society, Palace Compound under the aegis of Bharatiya Janata Yuva Morcha (BJYM), Manipur, Biren said that the War on Drugs was launched on July 18, 2018 with the primary objective of saving the present and future generations, particularly youth.
During those days, large  areas were under poppy cultivation and the issue of drug abuse was taking a very heavy toll on the whole society, the Chief Minister said.
The grave situation evoked a question whether poppy cultivation was done with investment from businessmen whose sole interest was earning big profits or whether it had any political motive of spoiling the entire youth population, Biren said.
Future generations are dependent on the present generation in many aspects. It is the duty of the Government to ensure that the youth are healthy and guided on the right path, and capacitated to bring forth and groom their talents, he said.
Biren then expressed keen desire for all the youth  to subscribe to Swami Vivekananda’s ideology “Service to mankind is service to God.”
Swami Vivekananda preached that one should follow one’s heart whenever there is a conflict between what one thinks and what one feels because this is always embedded in what one feels, Biren said.
As preached by Swami Vivekananda who is also the country’s youth icon, every youngster should have self-confidence and believe in God.
All the youngsters will be successful in life if they put into practice the teachings of Swami Vivekananda, asserted the Chief Minister.
Meiteis have suffered and sacrificed a lot but there is no unity within the community. The disunity among the Meitei community is unfailingly testified by the Seven Years Devastation at the hands of Awas (Burmese) and British occupation of Manipur, he said.
Being a majority community, Meiteis must sacrifice more, overcome several challenges and consolidate all the communities of the State. There will be unity in Manipur only when there is unity among the Meiteis, Biren said.
Talking about the Dzuko Valley, the Chief Minister stated that a road would be constructed on the side of Manipur apart from opening a police outpost.
The Government has been considering to station trained firemen and stock fire extinguisher cylinders at the police outpost. A team of policemen and firemen led by a DIG has already opened a base camp there, he said.
There has been no halt to the construction of Barak and Makru bridges. However, trailer trucks carrying 90 metre steel decks needed for the two bridges were stranded in Meghalaya for around 20 days, added the Chief Minister.
The trailers were stranded as the Government of Meghalaya prohibited movement of trucks weighing more than 20 tonnes. Nonetheless, the trailers took alternative routes and had reached the work sites.
The Government has set a target of completing one of the bridges by February, Biren said.
Notably, the National Youth Day was observed in commemoration of the 158th birth anniversary of Swami Vivekananda.
BJP Manipur Pradesh president S Tikendra gave a brief account on the philosophy of Swami Vivekananda.
Ministers S Rajen, O Henry, Rajya Sabha MP Leishemba Sanajaoba, MLAs Ngamthang Haokip, Dr Y Radheshyam, N Indrajit, BJP vice-president Dr U Deben, BJYM State president Ramkrishna Koijam and Deputy Director (Technical Education) Bhabheshwar Tongbram were also seated on the dais as presidium members.
.