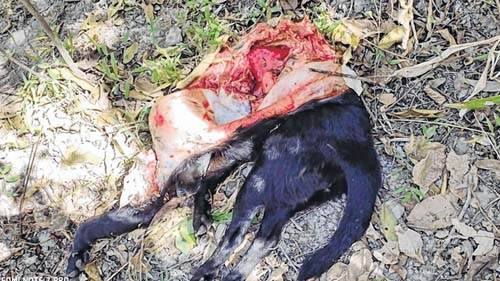 Our Correspondent
Senapati, Jan 11: Even as there were no proofs and evidences to identify the predator which killed hundreds of domestic animals in different parts of Manipur especially Senapati district since 2018, reports of the same have emerged in Karong areas under Senapati police station now.
The District Forest officials have been alerted in this regard and to take stock of the situation, 3 officials  visited the site, today.
The predator was reported between Karong and Khongnem. Several goats were found missing or killed since last December.
Altogether 5 goats reared by a Nepali family near Khongnem outskirts were also found dead.
According to sources, about 13 young and pregnant goats and a dog (Labrador breed) were found killed, suspected to be by the unknown four-pawed predator. The carcasses of the goats were found on four consecutive days (December 29, 30, 31 last year and January 1) while the carcass of the dog found on January 1 this year with a canine mark on its neck.