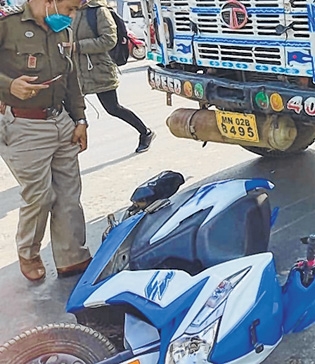 By Our Staff Reporter
IMPHAL, Jan 14: A road accident claimed lives of two girls aged 18 and 22 today at Kwakeithel Traffic Point under Lamphel Police Station in Imphal West.
The deceased have been identified as Thoudam Chinglembi (18), daughter of Nilachandra of Kakwa Lamdaibung and Yurembam Sylvia (22), daughter of Brajamani of Singjamei Chongtham Leikai.
The accident occurred when a water tanker truck rammed into the Honda Dio scooter they were driving at around 11.30 am at Kwakeithel Traffic Point.
Chinglembi was driving the scooter and she was killed instantly in the accident. Sylvia, who was riding on the pillion seat, was rushed to RIMS where she succumbed to her injuries.
Their lifeless bodies have been deposited at RIMS mortuary.
The driver of the water tanker Konthoujam Kaiku (23) of Kakching Khunou has been arrested and Lamphel Police Station has registered a case. The vehicle has also been impounded.