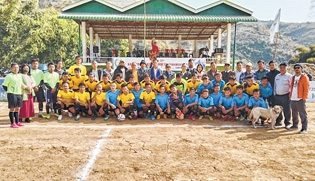 Our Correspondent
KANGPOKPI, Jan 13: The 17th Kanggui Inter Ward Tournament 2021 was kicked off impressively today at Brig M Thomas ground, Kangpokpi DHQs under the aegis of Kangpokpi Youth Union.
The Inter Ward Tournament is the biggest and most prestigious sports event held annually in the month of January in Kangpokpi District Headquarters relentlessly emphasizing the essence of unity, peace and tranquillity within the town and its vicinity. Haokholal Hangshing, Ex-Chairman ADC Sadar Hills graced the inaugural ceremony as the chief guest while Lunseh Kipgen attended as functional president.
More than 70 teams registered entry in the tournament for items such as Under-15 football, main football, veteran football, men's volleyball and women's volleyball.
Hoisting the 17th Kanggui Inter Ward Tournament flag, Haokholal Hangshing exhorted the people of Kangpokpi town to abide by the law of the town as well as law of the land made for the welfare  of the people as players in the tournament are abide by the rules and regulations of the tournament.
He said that when players in any sports event neglect the rules and regulations of the event it not only create problems for himself and the organizing committee but also instill bad lesson among the people which eventually lead to downgrading of the society.
It is therefore equally important for the people living together in the town to abide by the law of the town so as to bring unity as well as peace which is the key factor development in the society, he added.
Kangpokpi Town Committee chairman, Lunseh Kipgen and Kangpokpi Youth Union president, Haolet Khongsai also spoke on the occasion.
Vumminlen hattrick ( 18'(P), 52' and 60') and Lalgunmang goal  (28')  gave Ward No 8 an easy 4-2 win over Ward No 2 in the opening match of main football. Daniel (6', 28') scored both the goals for the losing side.
The second match between Ward No11(B) and Ward No 14 in the main football category ended 0-0.
Tomorrow, in the main category Ward No 7 and Ward No10 will play in the first match while Ward No 11(A) and Ward No 12 will play in the second match.
Veteran football will begin from January 18 while Under-15 football, men's and women's volleyball shall kick off later.