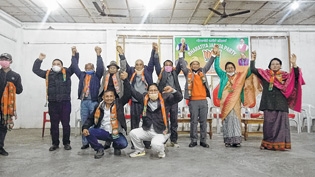 Our Correspondent
BISHNUPUR, Jan 17 : A reconsolidation meeting of the BJP leaders of Bishnupur Assembly Constituency was convened today at Kiyamba Ningsing Sanglen to settle the existing differences and work under Bishnupur Mandal.
The meeting was a fruitful one as the leaders unanimously agreed to do away with the differences and to work towards strengthening the BJP (Bharatiya Janata Party).
The meeting organised by BJP Bishnupur Mandal was attended by president of BJP Bishnupur District Committee, RK Bimola Devi; president of BJP Bishnupur Mandal, N Raghumani; convenor of the Election Campaign Committee BJP Bishnupur AC, N Sanajaoba; Chairperson of Bishnupur Municipal Council, L Maniyaima, BJP Councillors and others including candidates intending to contest on BJP tickets in the upcoming elections namely, K Krishnokumar, Th Yaima, O Nabakishore, Kumarjit. Party members who were earlier segregated due to some in-party conflicts were also present at the meeting.
Speakers, at the occasion, voiced together to shed personal differences which has forced them to stay apart and join forces for welfare of the people and to help realise the dream of Prime Minister Narendra Modi.
Apart from it, the members present also expressed views on how to strengthen the party right from the Mandal level.
BJP Bishnupur Mandal president, N Raghumani, at the occasion expressed hope that the meet will help usher into an all new beginning. He also appealed to all intending candidates to extend full solidarity to whomsoever the party award ticket rather than indulging in shifting parties from time to time.