JCILPS for more teeth to ILP enforced in State 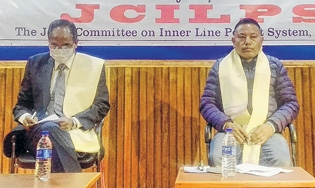 Newmai News Network
IMPHAL, Jan 17: A one-day discussion on Inner Line Permit (ILP) regulation in Manipur held in Imphal on Sunday observed that the Inner Line Permit (ILP) System extended in Manipur is imperfect.
"ILP system currently extended in the State will not be able to protect the indigenous people of the State", convener of Joint Committee on Inner Line Permit System (JCILPS), YK Dhiren expressed during the discussion held at the auditorium of Manipur Press Club, Imphal.
The Inner Line Permit (ILP) System was extended to Manipur on December 11, 2019, with President Ram Nath Kovind signing the order to this effect. Even as a year has passed since the extension of the system here, the State Government is yet to address the demands for a perfect guideline which will effectively protect the indigenous people, said Dhiren. "Despite the strong pressure from the JCILPS and other like minded civil society organisations, the State Government is yet to give a positive response", he alleged.
Dhiren then pointed out that ILPS guidelines published by the State Government in the State gazette on December 31 have failed to define who are the indigenous people, native people and permanent residents of the State in addition to the absence of a cut off base year. He observed that the system is useless and will be a non-effective regulation when it comes to curbing the influx of illegal immigrants/migrants into the State. Dhiren alleged that the ILP System currently enforced in the State is only to regulate entry and exit of the non-locals. Dhiren further said that the long pending demand of the indigenous people in the State to implement a law/regulation for protecting their identity, culture, language, political rights, economy and lands etc, will not be fulfilled if the ILP System is implemented without any nece- ssary fundamental points.
The JCILPS convenor said that today’s discussion would draft a recommendation based on opinions and suggestions of the experts and intellectuals taking part in the discussion which will be submitted to the Government for early rectification of the guidelines. “We will submit the recommendation to the Government and press to rectify the flaws in the guideline,” he said.
He observed that the State Government needs to work with a strong political will and determination to curb the threat posed by the huge influx of illegal immigrants. He further stressed the need to delve into every minute point which is required in framing the guidelines and implementing the same in the State.
"ILP system is a regulation which will determine the fate of the indigenous people", he said and stressed that the State Government should take the matter seriously. JCILPS will not compromise its stand on protection of the indigenous people, he added. During the discussion, many law experts and intellectuals pointed out the flaws of the guidelines while referring to the objective of extending the ILP to the State.