Covid vaccination drive No complaints of side effects : CM 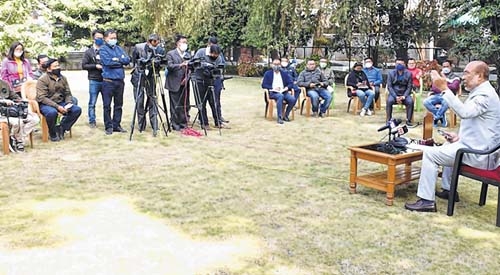 DIPR/Staff Reporter
Imphal, Jan 18 (DIPR): Chief Minister N Biren Singh has asserted that no report of any side effects regarding the COVID-19 vaccine has been reported until now since the start of the vaccination drive in Manipur.
Chief Minister N Biren was presented a memento by the Human Rights Defender Manipur (HRDM) today as an acknowledgement of his contributions  towards extension of Inner Line Permit System to Manipur.
Speaking to media persons before the presentation ceremony held at the lawn of his official residence, N Biren stated that the State Government has been closely monitoring the vaccination programme held throughout the State considering all necessary criteria to be taken up before vaccination.
He added that many senior and experienced doctors of the State had been vaccinated since the launch of the vaccination programme on January 16 and currently vaccination for health workers is going on at 130 facilitation centres.
Observing that the Central Government started the vaccination programme only after the vaccine had been scientifically proven as safe, he appealed to the public not to make negative comments about the vaccine without valid scientific proof. Instead of creating suspicion and panic in people’s mind with negative comments, anyone can come up with positive suggestions regarding the vaccination drive, he added.
The Chief Minister also maintained that the vaccination programme would cover all the population in phase manner and appealed to the public to have patience while waiting for their turns.
Later, HRDM presented a memento embossed with the words ‘Peace & Excellence Award of Appreciation’ to N Biren. HRDM chairman Joy Chingakham said that they were presenting a memento to Chief Minister N Biren as an acknowledgement of his contributions towards fulfilling the people’s decades old demand for enforcement of ILPS in the State.
HRDM was set up on October 10, 2015. Apart from working together with several like-minded human rights organisations, HRDM has been sending reports to the UN every four years, he added.