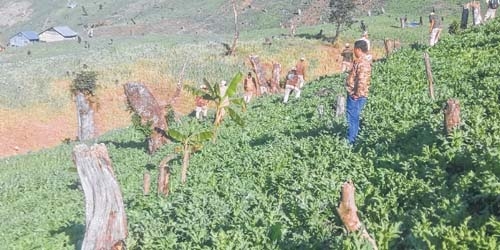 Mungchan Zimik
Ukhrul,  Jan 18 : The progressive and rapid expansion of poppy cultivation in Ukhrul district has become a serious concern over the threat it poses to environment apart from other issues such as health problems, family issues etc.
Although the poppy cultivated hill ranges look majestically attractive  from far, a closer look and better understanding will tell a different story.
No insects can be seen buzzing, not a single burrowing animal are visible with no sound of animals or birds while taking a trek through the poppy cultivated hill ranges.
When this correspondent interacted with some of the poppy farmers, they revealed that they use chemical fertilizers mostly Di-Amonium Phosphate and pesticides regularly on the hill ranges to grow poppy plants.
Pesticides are also used extensively to ward off the attacking insects and animals.
Assistant Conservator of Forest (ACF),  Ukhrul Wungrin expressed concern over the ceaseless exploitation of forest land, which in turn has impacted on the biodiversity, merely for making money.
Uncontrolled deforestation for poppy cultivation coupled with massive spraying of chemical fertilizers at the upland slope directly or indirectly impact on the environment as well as posing health hazards to those living in the surrounding villages.
Wungrin said that the hill ranges were all catchment areas that provide perennial water source for the down flowing rivers but with forest cut down to make way for poppy cultivation this is no longer so.
This is a major factor in climate change as well as causing water shortage in the hill areas.
Chemical fertilizers & pesticides dissolve in the water and become toxic which makes it unfit for human consumption.
Villagers of Litan area informed that the problem of miscarriage among  pregnant women has become more common after the villagers started to engage in massive poppy cultivation.
Conventionally pregnant women were forbidden to visit the area during poppy flowering season. There is however no scientific reason to substantiate this.
The ACF stated that excessive use of fertilizers affect humans in different ways,  adding that it reduces natural soil fertility, increase soil erosion, which directly impacts on the flow of water, drying up of river beds, increase in siltation etc.
The continous forest destruction has impacted the natural cycle and this has led to change in the natural vegetation in some regions.
Manipur Government’s “War on Drugs” including a drive against illegal poppy cultivation should not only be confined to destruction of poppy plants but educate the villagers about the alarming facts and its detrimental impact  on the whole ecosystem.
Wanton deforestation for timber extraction,  jhum cultivation, poppy cultivation,  forest fire etc are the main factors for rapid forest depletion in Ukhrul district.
According to rough survey reports, poppy cultivation has now expanded to over 5000 acres in Ukhrul district alone in a short span of time.
The State Government should intervene and  come out with policies to replace poppy plants with alternative cash crop for better management and to sustain livelihood.
The support and involvement of village headmen,  women leaders,  youth leaders and village authority members as stake holders are needed in the fight again poppy cultivation.
This report is filed under the perspective of Climate Change