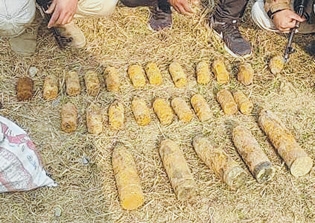 Our Correspondent
KANGPOKPI, Jan 20:  As many as 25 unexploded bombs including two hand grenade along with some live ammunition believed to be from the World War II period were recovered by Kangpokpi police at Kalapahar this afternoon.
The bombs and ammunition were unearthed while digging the earth for a septic tank on a plot belonging to Suraj Pradhan (26), son of (L) Deepak Pradhan of lower Kalapahar in Kangpokpi district this afternoon.
After receiving information, a team of Kangpokpi police led by SI Rex Haotinlal under the supervision of SP Kangpokpi, PG Singsit, IPS and Lalminlal Misao, MPS, Addl SP (Ops) Kangpokpi rushed to the spot and recovered the items.
The recovered items included two hand grenades, eight lathode bombs, five 2 inch motor bombs and other ten bombs similar to lathode bombs apart from some live ammunition. The recovered items were brought under the custody of Kangpokpi police station.
Manipur was a theatre of WW-II.