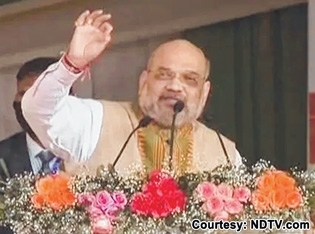 Kokrajhar/Nalbari, Jan 24
The BJP, with its allies, will form the next Assam Government, Union Home Minister Amit Shah said today, promising to make the State "violence-free", "infiltrator-free", and "flood-free".
He based his forecast on the Bodoland Territorial Council (BTC) victory his party scored last December in alliance with the hardliner United People's Party Liberal (UPPL). Speaking in Kokrajhar today, he also reiterated Prime Minister Narendra Modi's emphasis on ensuring the political and cultural welfare of the State's indigenous communities.
After handing over Government financial grants to those who had lost their lives in the Bodoland movement, Mr Shah said a year had passed since the Bodoland Accord was signed and now that elections to the BTC had taken place peacefully, the region would prosper. He announced that Rs 500 crore had been sanctioned to build a road network in the Bodo region.
"Now Bodoland will start walking on the path of development. Once this region saw a blood bath. Now it will see maximum development," he said expressing immense satisfaction at the rally he was addressing in Kokrajhar. "A year ago, when the BTR accord was signed, Modiji told me to hold talks and solve the problem of insurgency…Now, for the first time, we have seen Bodos and non-Bodos together. This is the answer to those who had divided Bodos and non-Bodos."
He assured those gathered that, in a few years, Bodoland would be the most developed area in Assam.
Mr Shah is in Assam as part of a two-day visit to the region. He spoke a day after PM Modi himself visited Assam's Sivasagar district to attend a ceremony where he handed over more than one lakh land titles to members of the State's indigenous communities.
Like the Prime Minister, Mr Shah, too, refrained from saying anything about the Citizenship Amendment Act (CAA).
Passed by Parliament in December 2019, CAA set a cut-off date of December 2014 to grant citizenship on persecuted minorities from India's neighbourhood. The new law set off a huge uproar in Assam, a State that has for years borne the brunt of illegal immigration.
Even as Mr Shah spoke today, activists of the All Assam Students' Union burnt copies of CAA as part of its protests across the State against Mr Shah and Prime Minister Modi's visit to the State.
Speaking later in Nalbari, he said only the BJP can make Assam infiltration-free. He cited the example of the abrogation of Article 370 in Jammu and Kashmir and the construction of the Ram temple in Ayodhya to back his claim.
"Do you want to make Assam infiltrator-free or not ? Can Congress stop infiltration ? They will rather open the gates. Only the BJP can do that," he said. The Congress, he said, claims the BJP was communal and yet, in Kerala, it was allied with the Muslim League while in Assam it was Maulana Badruddin Ajmal of the All India United Democratic Front.
"Give us five years. We will give you violence-free, infiltrator-free, flood-free Assam," Mr Shah said.
The Union Minister said earlier in Kokrajhar that the promises made in the Bodoland Accord were part of PM Modi's larger vision for peace and development of the North East.  The Accord was signed on January 27 last year by the Centre, the Assam Government, all four factions of the National Democratic Front of Boroland, and the then BTC chief Hagrama Mohilary.
"The BJP and the UPPL coming together and winning an election is a trailer to Assam polls," he said. The 2021 Assam Assembly polls are only six months away, with the BJP looking to win at least 100 of the 126 seats in the State. The choice of the 21 lakh-odd multi-ethnic voters of BTR was viewed as a test case before this year's polls.
NDTV