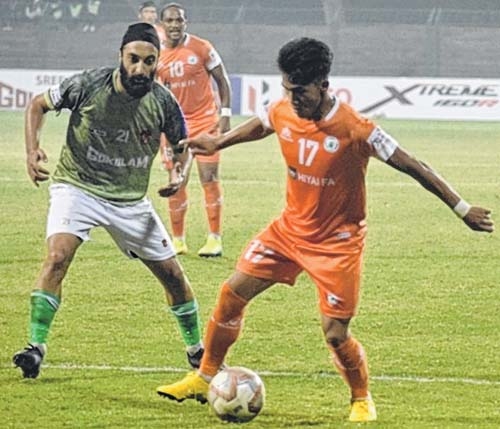 KALYANI, Jan 25
Gokulam Kerala FC got back to winning ways, defeating NEROCA FC 4-1 at the Kalyani Municipal Stadium in Kalyani, West Bengal today  to take their tally on the Hero I-League table to six points. A Jiteshwor Singh own goal and strikes by Philip Adjah, Jestin Geroge, and Mohammad Sharif penalty were enough to hand the Malabarians three points and put them in the top half of the Hero I-League table. NEROCA pulled one goal back through Songpu Singsit in the dying embers of the match.
It seemed like Gokulam Kerala FC were out to prove a point after defeat in their last fixture to Aizawl FC and the Malabarians made a strong statement by hammering three quick goals past high-flying NEROCA in the first half. In the 13th minute, forward Emil Benny could have opened the scoring for Gokulam but his shot went wide. Two minutes later, Benny’s shot from close range was saved by the opposition custodian and the ball fell inches away from Philip Adjah, before going out for a corner.
Constant badgering of their opposition’s defence was meant to open up a chance sooner or later. Little did the Malabarians know that it would be through an own goal in the 23rd minute. A well-worked corner routine saw a whipped cross from the left flank and in an attempt to clear the ball, NEROCA’s Jiteshwor Singh headed it into his own net.
In the 31st minute, Dennis Antwi found Philip Adjah in the box and the Ghanian smashed the ball into the back of the net from close range to double Gokulam’s lead. A third goal soon came in the 39th minute when Jestin George chested a Deepak Devrani free-kick into the net after a deflection.
With Gokulam Kerala FC dominating possession and creating chances at will, it was all the Malabarians in the first half. NEROCA had a slight sniff of the goal seconds before half-time but failed to find the target. The half-time scoreline read 3-0 in Gokulam’s favour.
The second half was a pale complexion of the first. With Gokulam confident of defending their three-goal cushion, the Malabarians adopted a more cautious stance and tried to be defensively compact. A spurred NEROCA side fought to create chances, but much like the first half, Gokulam’s goalkeeper was a mere spectator in the proceedings and was hardly called into action.
In the 57th minute, Judah Garcia tried to catch the opposition keeper off guard on his near post, but his shot lacked precision and crashed into the side netting. In the 61st minute, NEROCA were provided a golden opportunity to reduce their deficit when a cross found Khaiminthang Lhungdim in the box. The midfielder took a crack onto goal but drove his shot way wide of the target with only the goalkeeper to beat. Meanwhile, having a commanding grip over the match meant Gokulam enjoyed possession and made a lot of square passes to keep the ball to themselves. Although the Malabarians attacked, they seemed cautious so as to not concede a goal on the counter.
In the 86th minute, Dennis Antwi was brought down inside the box and from the resulting penalty, Mohammad Sharif smashed home to put Gokulam four goals ahead. But just two minutes later, NEROCA reduced their deficit after a brilliant strike by Songpu Singsit.
But despite all of NEROCA’s valiant efforts, the Manipur-based club were outplayed by far and large today by Gokulam and at the end of time, the scoreline read 4-1 in the Malabarians’ favour.     AIFF Media Team