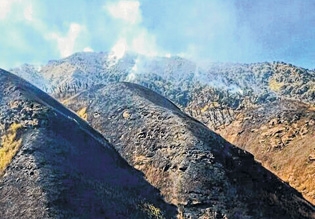 By Our Staff Reporter
IMPHAL, Jan 5: The raging wildfire that originated from the Dzuko valley has razed the peak of the Mount Iso to ashes.  Despite the efforts of the NDRF (National Disaster Response Force), Indian Air Force and firefighters to bring the wildfire under control, the infernos rage on for the 8th day and are increasing in magnitude.
The fire broke out in the Dzuko valley on December 29.
The wildfire is now raging down the lesser/lower ranges of Mount Iso, the highest mountain in Mani-pur.
Apart from the NDRF, firefighters, police and locals of Senapati district, the Indian Air Force has been deploying several choppers to douse the fire.
Members of the All Manipur Working Journalists Union (AMWJU) in- cluding this reporter travelled to Senapati district today to reach the blazing site on Mount Iso, however they were not able to reach the site. The team found NDRF, SDRF and Manipur Fire Service personnel unable to reach the actual site. Nonetheless, a team of the Mani-pur Mountaineering and Trekking Association has started scaling the mountain to reach the blazing site.
From the first base camp set up at JNV Mao campus, the journalist team travelled some 10 kilometres on vehicles towards the second base camp and found NDRF, SDRF, Manipur Fire Service personnel and MMTA members stationed at the camp.
From the second base camp, the team travelled about 40-50 minutes on motorable roads amid thick bamboo groves to reach the lower slopes of Mount Iso.
The journalists found that none except the choppers of the Indian Air Force have been able to reach the actual sites of blaze.
Waikhom Rona, a sub-officer of the Manipur Fire Service who is stationed at the lower range of the Mount Iso, said that the NDRF personnel and firefighters are able to save the lower portion (where he is stationed) from the wildfire, but they are not able to reach the actual site of the fire.
The NDRF and the fire service personnel are not able to reach the actual site as there is no actual road and the mountain terrain is quite treacherous. The slopes are very steep and the wind is strong. At night-time, the temperature dips sharply. Besides, the NDRF and the fire service personnel have to scale the Mount Iso peak first to reach the blazing site, the officer said.
Knowing it was “impossible” for the journalist team to reach the actual site, they returned to the second base camp. Upon returning, the team met PHE Minister Loshi Dikho and he assured that all efforts will be put into putting out the fire. The wildfire is raging on the western range of Mount Iso and “where we are standing on is the side of the range that has been saved from the fire”, he said.
It may be noted that PHE Minister Loshi Dikho is also the local MLA and he has been closely monitoring the situation. Dikho said that the Chief Ministers of Nagaland and Manipur have talked on the issue and Nagaland CM called him on phone yesterday and they spoke regarding the fire at Dzuko and the Mount Iso. There is likely to be an inquiry/survey on the fire by a joint committee consisting representatives of both the States, he said.
On the other hand, Senapati district Deputy Commissioner Th Kirankumar who is handling the situation told media persons at JNV base camp that the origin of the fire is not known yet. The fire started at Dzuko valley and spread to Mount Iso range. The fire did not reach Mount Iso till December 30. Wildfire was reported on Mount Iso on December 31. The extent of the damage couldn’t be ascertained yet, he said adding that the Forest Department will be conducting a survey using satellite mapping to access the damages.
Meanwhile, responding to the Chief Minister’s call, a joint team of Maram Students’ Union, Meitei Leepun and Thangal Students’ Union reached Mount Iso with fire fighting equipment. The fire-fighting equipment were provided by RP Joseph, Principal Rangtaiba Memorial Institute, said the team.