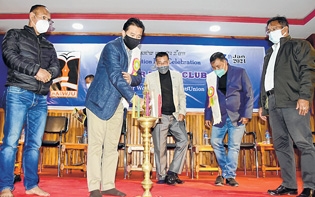 Imphal, Jan 7 (DIPR)
Information and Public Relations Minister Thongam Biswajit Singh handed out pension books of 57 journalists approved by the Directorate of Information and Public Relations, at the 46th foundation day cele-bration of Manipur Press Club, yesterday. The 57 pension books were handed over to All Manipur Working Journalists Union (AMWJU), General Secretary during the function held at the auditorium of the press club.
Speaking as the chief guest of the function, Bis-wajit said that democracy has three pillars but the media is considered to be the fourth pillar.
Biswajit continued that as the Chief Minister was also from the media fraternity, he understands the value and importance of the media fraternity.
He said that the Manipur State Journalists’ Welfare Scheme is an encouragement for the fraternity. The IPR Minister also said that recently the pension amount for journalists has been increased from Rs 4000 to Rs 8000 and family pension from Rs  2000 to Rs 5000 respectively.
Further speaking on the issue of some media persons (above 45 years of age) being left out from the pension scheme, the Minister also assured to look into the issue. It may be mentioned that at present, the pension is provided to media persons recognised by DIPR between the age of 18-45 years.
The Minister also spoke on the importance of unity. He said that the present Government believes in inclusive development and added that both journalists and hawkers are covered under the CMHT scheme.
Biswajit also said that every section of the society has a responsibility towards development of the society and that “only when we fulfil our responsibilities we can bring development”.
Speaking as a guest of honour, Agriculture Minister Oinam Lukhoi Singh said the media acts as the eyes and ears of the public and highlights grievances of the people.
The Minister also highlighted the importance of unbiased reporting and said every reporter should abide by the media ethics and be neutral in their reporting.
In his speech, Education Minister Sorokhaibam Rajen Singh said that the media acts as a bridge between the Government and the public.
The function was also attended by Commissioner IPR M Joy Singh, Director IPR H Balkrisna Singh, Editor’s Guild Manipur president Khogendra Khomdram and All Manipur Working Journalists’ Union president Bijoy Kakchingtabam, among others.