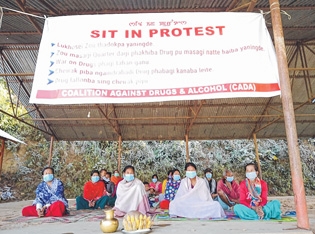 IMPHAL, Jan 9
Volunteers of Wakha Nupi Samaj Association, Wakha Youth Club and Coalition Against Drugs and Alcohol (CADA) staged a sit in protest at Wakha Community Hall in Imphal East district today urging the Government to appeal to a higher court regarding the high profile drug haul case of 2018 for reinvestigation, said a statement of Secretary Information & Publicity, CADA.
Addressing the gathering, vice president of CADA Ningthoujam Doren stated that the people of the State are highly disappointed with the acquittal of Lhukhosei Zou former Chandel ADC who was arrested with drugs worth crores from his quarters. His acquittal is a big loss for the State Government since the case was between him and the Government.
He alleged that during the initial stages of investigation there was pressure from political wings, instances of removing the chargesheet, elimination of drug samples etc leads to strong suspicion that the case might have been tampered. Therefore he urges the Government to move the case to higher court for reinvestigation for a fair and transparent trial, it added.
He also warned of strong form of agitation if the Government does not pay any heed to the current democratic and peaceful form of protests.
Nongthombam Medha, secretary organisation CADA Imphal East District Committee stated that it is high time to strengthen war on drugs in order to protect the future generation from the wrath of drugs. Also he urged the Government to move the case to a higher court for reinvestigation to restore the faith of the public in the judiciary thereby awarding befitting punishment to the alleged drug dealers.