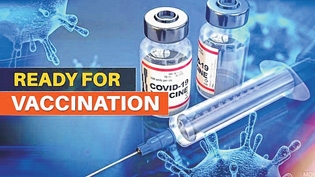 NEW DELHI, Jan 9
The Centre said on Saturday the Covid-19 vaccination drive would begin in the country on January 16 when nearly 30 million healthcare and frontline workers will be innoculated, followed by those above 50 years of age and the under-50 population groups with co-morbidities.
"The roll-out of Covid-19 vaccine will provide priority to the healthcare workers and the frontline workers who are estimated to be around 3 cr, followed by those above 50 years of age and the under-50 population groups with co-mor- bidities numbering around 27 cr," the Centre stated in a release.
Prime Minister Narendra Modi chaired a meeting to review the status of the coronavirus pandemic in the country along with the preparedness of the States and Union Territories (UTs) for the vaccination drive. The meeting was attended by the Cabinet Secretary, Principal Secretary to PM, Health Secretary, and other senior officials concerned, the release added.
"After the detailed review, it was decided that in view of the forthcoming festivals including Lohri, Makar Sankranti, Pongal, Magh Bihu etc., the vaccination will start from 16th January 2021," the release said.
During the meeting, PM Modi was briefed about the preparedness status of the Centre in close collaboration with States and UTs for rolling out vaccine doses in near future and was also informed about the Co-Win app. Co-Win is a digitised platform that will provide real time information of vaccine stocks, storage temperature and individualised tracking of beneficiaries of the vaccine. Over 7.9 million beneficiaries have been registered on the app.
The release pointed out that over 61,000 program managers, 200,00 vaccinators and 370,000 other vaccination team members have been trained so far as part of the training at the states, districts and block levels.
India has registered over 10.43 million Covid-19 disease cases till now of which 150,798 people have lost their lives. The active cases continue to remain below the 300,000-mark while the recoveries are over 10 million and constitute 96.41 per cent of the total caseload. Hindustan Times