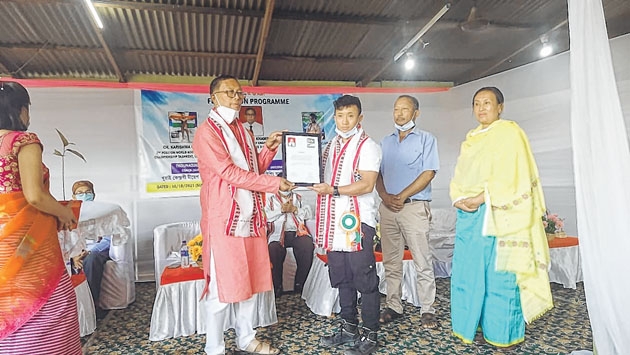 By Our Staff Reporter
IMPHAL, Oct 10 : Bodybuilders, Chingangbam Karishma Chanu and Joydev Thongam who represented India at the recently concluded 12th World Bodybuilding and Physique Sports Championship 2021 were felicitated by Khagokpam Khamba who is preparing to contest in the upcoming State Assembly Election today at his residence at Khurai Awang Kongpal Laishram Leikai.
Mentioned may be made that Karishma brought home a silver medal from the championship held at Tashkent, Uzbekistan as she finished second in the women's open bodybuilding event while Joydev finished fourth in the junior men's bodybuilding category.
The former additional Chief Engineer (Electricity Department), Kh Khamba who is among intending candidates of Khurai Assembly constituency, not only feted the athletes with cash rewards but also accorded reception to coach of Super Gym, Muhindro and assistant coach Sougrakpam Bungcha during the programme which was organised by Khamba's Central Election Committee.
Speaking at the occasion, Khamba expressed pride over the two athletes from the Khurai Assembly Constituency and maintained that their achievement not only have made the AC proud but also the entire State and the country.
While wishing the athletes to achieve more in their future competition, the social worker also assured to assist them at his level best in future. The athletes also expressed gratitude to Khamba for encouraging them.
The programme was also attended by Thokchom Manibabu, retired Joint Director (Training) who is also the "Central Election Committee" president besides advisors to the Central Election Committee, Takhellambam Gulamjat and Takhellambam Nabachandra.