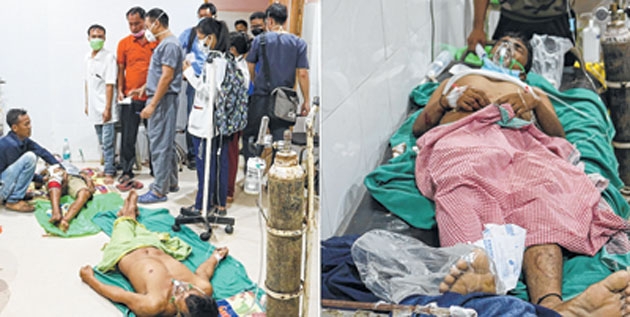 By Our Staff Reporter
IMPHAL, Oct 11 : Barely 48 hours after an ugly confrontation broke out between supporters of two rival candidates at Singjamei Assembly Constituency, things took an even uglier turn with three persons receiving bullet injuries during a clash between workers of former Minister Thounaojam Shyamkumar and intending candidate in Andro Assembly Consti-tuency Lourembam Sanjoy today.
The condition of one of them is stated to be serious and he has been admitted to Raj Medicity while the other two are recuperating at JNIMS.
The incident happened while supporters of Lourembam Sanjoy were marching towards Yairipok Yambem Ningthou Nai after a political meeting at Yambem Lai Mamang community hall.
Even as the supporters of Sanjoy reached Yairipok Yambem, they came across a political meeting of former Minister Th Shyamkumar being held at the residence of one of his active workers Sarungbam Bimol. There a major confrontation broke out between the supporters of the two intending candidates.
Even as the confrontation intensified, some of the workers from either side took out double barrel guns and started firing at each other. Stones also flew from either direction towards the other.
As news of the stand off  spread, a large police posse of Imphal East and police commandos of Thoubal rushed to the spot to bring the situation under control.
During the confrontation and the melee that followed, at least three persons received bullet injuries and they were rushed to JNIMS from Yairipok Primary Health Centre.
The injured persons have been identified as Loukrakpam Jayenta (33) of Yairipok Nungpokpi who received a bullet injury on his right leg, Md Abdul Khalique of Yairipok Changamdabi (53) who received a bullet wound on the stomach and Sabir Ahmed (36) of Tulihal who received 8 bullet injuries on the chest and other parts of the body.
Later at about 1.30 pm, as the condition of Sabir Ahmed became critical, he was rushed to Raj Medicity by family members.
Till the time of filing this report in the evening, police were still deployed at the area to prevent further escalation of the incident.
Speaking to reporters at JNIMS, one of the injured, Loukrakpam Jayenta said that the incident occurred while he was passing through the said area and suddenly he heard the loud report of gun shots from amongst the crowd.
Jayenta said that he was not a part of either side and added that he was just passing through.
In another case of pre-poll violence, supporter of Soibam Subashchandra, former MLA of Naoriya Pakhanglakpa allegedly fired rounds of gun fire from a licensed gun near the venue of an election meeting at Langthabal Ningombam.
The said election meeting was organised by supporters of intending candidate Soraisam Kebi.
Sources said that prior to the firing a heated argument ensued over the purpose of holding an election meeting of Kebi at Langthabal Ningombam.
Despite the opposition raised by supporters of Subashchandra the election meeting proceeded. It was later that some alleged supporters of Subashchandra arrived at the spot in a four wheeler and opened fire, said sources.
No one was however injured in the incident.
Soon a team of Imphal West police rushed to the spot to bring the situation under control. Police have been deployed at the said area to control the situation.