BJP has never poached on any other party : Sharda 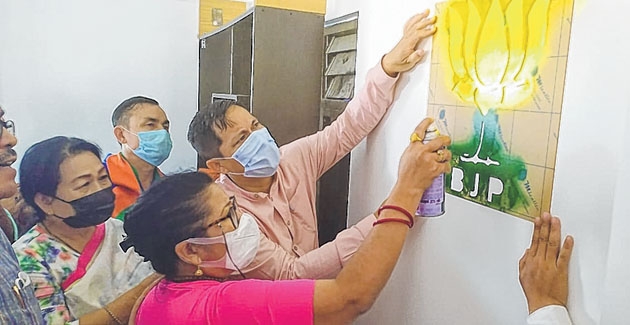 By Our Staff Reporter
IMPHAL, Oct 11 : In the face of many, particularly from the Congress jumping ship to the BJP, State unit president of the saffron party A Sharda Devi today declared that the party has never poached on any party to wean away members. ‘However if anyone wants to join us, then our doors are always open,’ she added.
Speaking to reporters at the BJP office at Nityaipat Chuthek, Sharda said that the BJP has never poached anyone to join them and rebuffed MPCC N Loken's claim that the BJP's attempt to wean away Congress members will not be successful.
The BJP is a value based party, she said and added that if anyone wants to join the party on the basis of its performance then all would be welcome, said Sharda.
Stating that the target of the BJP is to win at least 40 seats in the 2022 Assembly election, she said that the party believes in the voice of the people. Everywhere Prime Minister Narendra Modi, Chief Minister N Biren and the BJP led Government are on the lips of everyone and this means the party today enjoy the trust and confidence of the party.
Mocking MPCC president N Loken, Sharda said that it is amusing to see the Congress leader trying to run down the achievements of the BJP. Taking another dig at the Congress, Sharda said that the achievements of the Congress Government in its 15 years in power may be seen in the flyover, some roads and some shabby works here and there.
Moreover most of the works which the Congress claims they have done were all included in the package announced during time of Atal Behari Vajpayee as the Prime Minister, Sharda claimed.
To help the economically weak families, the BJP Government at Imphal has launched the CM Hakshelgi Tengbang, said Sharda and questioned what the Congress did during its 15 years in power for the poorer section of people.
Propaganda can never negate the CMHT, Go to Hills programme and the numerous schemes launched for the weaker sections of society, said Sharda and added that the Congress ought to acknowledge the good works being done.
Sharda also advised the Congress not to politicise welfare measures taken up for the people.
On the talks that despite the regular visits by Central leaders to the State, not one package has been announced as yet, Sharda said that Union Ministers come here to assess the ground reality, the facts. It is after getting a first hand account of the reality that relevant reports are submitted to the Prime Minister.
It is only after the reports are assessed and studied minutely that packages follow, Sharda said.
The State unit BJP president further expressed satisfaction over the recent visit of BJP president JP Nadda and added that the office that was inaugurated during his visit is  for the people.
Nambol is the home turf of the MPCC president who is also its representative, said Sharda and added that the very fact that a large number of people came out to receive JP Nadda should say something very significant.
During his visit, JP Nadda met core members of the BJP, Ministers and BJP  MLAs and worked out the modalities of achieving the needed target in the next Assembly election, added Sharda.