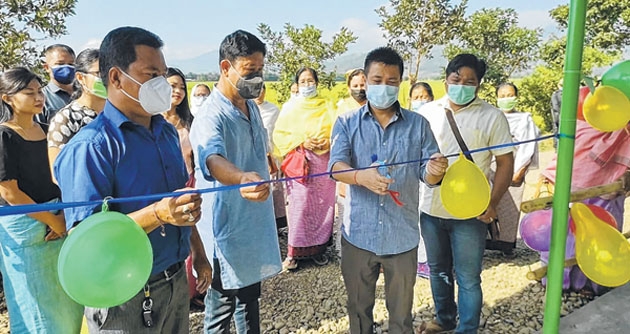 By Our Staff Reporter
IMPHAL, Oct 11: MLA of Sekmai Assembly Constituency, H Dingo Singh inaugurated a waiting shed at Moibung Khunou and laid foundation stones for community halls at Kanto Shantipur and Loitang Khunou Bazar today.
Speaking at the inauguration ceremony of the waiting shed, H Dingo Singh that the waiting shed has been constructed from 25 percent of MLA Local Area Development fund which are being utilised by Zilla Parishad, Pradhan and Ward members of panchayats for people's welfare.
Lauding the incumbent BJP Government led by Chief Minister N Biren Singh, he said that the commendable initiatives such as Start Up Mission of the Government has inspired the youths towards the path of development thereby inculcating in them the idea of entrepreneurship and other welfare activities.
Emphasizing on the developmental works taken up in Sekmai AC, the MLA maintained that developmental works are being ramped up in the nook and corner of the AC.
He further assured that all the works which were on hold due to the ongoing COVID-19 pandemic will be completed soon.
Today's programme was also attended by Pradhan of Khurkhul Gram Panchayat, I Shanta Singh, GRS Robert Singh and ward members.